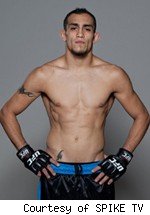 In the championship bout to crown the next "Ultimate Fighter," finalists Ramsey Nijem and Tony Ferguson will meet for the title and a guaranteed UFC contract. The two welterweights won their semifinal fights in an episode that aired Wednesday night on Spike TV. Additionally, the UFC has made official for the televised main card a bout pitting losing semifinalists Chris Cope and Chuck O'Neil against each other.

And four other TUF 13 cast members will see action against each other on the preliminary card on Saturday: Shamar Bailey vs. Ryan McGillivray and Justin Edwards vs. Clay Harvison. The UFC and Spike made those fights official Thursday morning.

Bailey, a Strikeforce veteran, was one of this season's favorites and was coach Junior dos Santos' top pick. He advanced to the quarterfinals, but was upset there by Cope. The Indianapolis firefighter has trained alongside UFC vets Chris Lytle and Matt Mitrione, both also veterans of "The Ultimate Fighter." His opponent, McGillivray, was dos Santos' second pick. He, too, lost his quarterfinal fight. The five-year Canadian veteran started his career with Maximum Fighting Championships in Canada. Nine of the 11 wins in his pro career have come by submission.

Edwards, who trains in Ohio with Jorge Gurgel, lost his first fight in the house to Ferguson, who went on to reach Saturday's finals. In his pro career, Edwards is 6-0 – with six first-round stoppages. The last five have come by submission with four by guillotine. Four of his wins have come in less than one minute. Edwards' second pro fight was for Bellator, and he also has a win over Josh Rafferty, from TUF 1, on his resume. Harvison, who fought for Brock Lesnar's team, won his first fight this season before losing to Nijem in the quarterfinals. The 6-1 pro has fought all seven of his bouts in Georgia, and all six of his wins have come in the first round.

Seven of the eight quarterfinalists from TUF 13 are on Saturday's card. Only Zach Davis is absent, replaced by Edwards. Davis lost a quarterfinal fight to O'Neil, but suffered torn retinas in both eyes and was told by doctors on the show that he should no longer fight.

Saturday's TUF 13 Finale takes place at The Pearl at The Palms Casino Resort in Las Vegas. The main card, which will air live on Spike, features a highly anticipated lightweight contenders fight between Clay Guida and Anthony Pettis, the last WEC lightweight champion. And Ed Herman and Tim Credeur meet in a middleweight bout, the return to action for both after nearly two years off because of injuries.