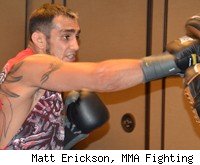 LAS VEGAS – Every season of "The Ultimate Fighter" has a villain. After the season, that villain usually wants to let the world know that he's not really a villain, he just plays one – or is portrayed as one through editing – on TV.

Tony Ferguson is the Season 13 villain, and on Thursday, two days ahead of his fight in the finale against Ramsey Nijem, he said he's looking forward to making amends for his actions late in the season, when he was shown commenting about housemate Charlie Rader's family situation, setting off this season's biggest house brouhaha.

"I figured out a hell of a lot about myself, especially watching that episode," Ferguson said Thursday after a workout at The Palms Casino Resort. "I figured out that's not the kind of person I want to be. That's not the example I want to set for kids. I said I wanted to make some changes, and I have."

Ferguson (10-2) spent a month and a half training with Team Death Clutch, the famed camp run for former UFC heavyweight champion Brock Lesnar in Alexandria, Minn. Lesnar was Ferguson's coach on the show, and Ferguson said it was the work he put in while on the show that led to Lesnar not only inviting him to Minnesota to train, but sponsoring him with his Death Clutch apparel brand.

That good, Ferguson believes, came not just from his performances on the show – three knockouts to reach the finals – but how he carried himself during training.

"If you're doing your own thing, you're doing the right thing," Ferguson said. "I kept to myself, and Brock saw that and he saw that I didn't need to be told exactly what to do. ... When it was a wrap, Brock brought me into the room with coach Marty and kicked all the other guys out and said, 'I don't want you guys telling nobody (about training in Minnesota). This is just us.' Brock allowed me to be inside his family group, and that was the coolest thing in the world. That guy is a role model like crazy, no matter what anybody says about Brock."

When it comes to public perceptions, Ferguson might also look to Lesnar for advice. Lesnar was vilified even before he stepped foot in the UFC due to his WWE pro wrestling background. A post-victory speech at UFC 100 after a vicious win over Frank Mir also rubbed many fans the wrong way, forcing the star heavyweight to apologize, make some amends and at least reconsider his public persona.

Ferguson said having viewers of the show not like him after the last two episodes aired is new territory for him. And while he accepts the likelihood that Nijem will be the fan favorite for this fight, he thinks he can change things.

"This is the first time that people have been mad at me, which just adds more fuel to my fire," Ferguson said. "But I don't like that – I want to turn it around. That's the biggest thing that Brock saw – that's why he invited me."

Ferguson will also be the betting underdog in the fight, coming in at +110 to Nijem's -140, even though he has more than twice as much professional experience. At 10-2, nine of his pro wins have come by stoppage.

But Ferguson said he simply believes winning on Saturday is his destiny, and that he belongs "amongst the greatest."

"I always want to be the underdog," Ferguson said. "This is my time. I've been putting in my time day in and day out. I've had those office cubicles where everyone hates it, and nobody wants it – but nobody really does anything. They just settle for it. I don't want to settle. This is exactly where I need to be. This is what I deserve, and I need to be the next Ultimate Fighter."

Ferguson and Nijem fight in the main event of the TUF 13 Finale on Saturday at The Pearl at The Palms in Las Vegas. The main card, which also features a lightweight contenders fight between Clay Guida and Anthony Pettis, airs live on Spike TV at 9 p.m. Eastern.