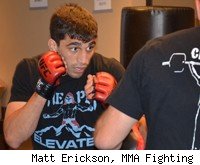 LAS VEGAS – If Season 13 of "The Ultimate Fighter" was a test for Ramsey Nijem, he certainly could have done worse than Court McGee as his study guide.

McGee, the Season 11 winner of the show, is a friend and training partner of Nijem, who fights in this season's finale on Saturday. Watching McGee go through the same trials and tribulations in the house got him prepared for what he would have to face when his turn came.

Now things are going just about as planned, with one last hurdle to clear.

"I'm good friends with Court McGee, and when he went through the house I saw what he was able to accomplish," Nijem said Thursday after a training session at The Palms, site of Saturday's TUF 13 Finale. "I just took his advice and did what he did, and it's had the same results so far."

Nijem's run through the Season 13 welterweight bracket has been as dominant as that of his Saturday opponent, Tony Ferguson. Ferguson finished his three fights on the show by knockout. Nijem, a member of coach Junior dos Santos' team, had a pair of rear naked choke wins and a TKO in the semifinals.

But Nijem, who trains at John Hackelman's Pit camp in California, as well as The Pit Elevated in Utah, believes his quarterfinal win over Clay Harvison, a quick first-round submission, was when he really believed this season's title could be his for the taking.

"Once I finished that quarterfinal fight in under a minute, I felt like I made a statement there," Nijem said. "I felt like I was going to win the show."

Nijem also perhaps endeared himself to viewers with some of his antics on the show and a carefree attitude. Ferguson on Thursday implied Nijem's on-screen personality was merely a persona: "It's just an image – everybody's got to stand out, I guess," he said.

His "Stripper Ramsey" nickname came from his impromptu striptease on the show, and his allegiance to the TV show "Glee" also had housemates rolling their eyes. But Nijem said the goofy side of him has always been around.

"If you ask any of the guys on my team, they'll say 'That's Ramsey,'" Nijem said. "Everyone's like, 'Your family, how do they feel about this?' and they shake their head. My mom, I've been embarrassing her since I was born. So it's just another opportunity for me to embarrass my mom. That's what she expected. She was like, 'At least you were yourself.' My mom's a fun person. Christmas Eve, we turn on the music and start having a dance party at Christmas. And clothes got off in the family living room. It's just how me and my family are. We're fun and we're kinda wild."

If Nijem is the feel-good story of this season's finale, his opponent has set himself apart as the heel. A late-season outburst that brought housemate Charlie Rader's family into play went too far, Nijem said.

At the end of the day, though, Nijem said his personal feelings for Ferguson don't matter. He has a trophy and contract to win.

"He made an idiot of himself," Nijem said. "He went out there and said some very inappropriate things about someone's family, which is a line that you shouldn't cross. I sensed that in the beginning, and I was always kind of wary about him and his true colors came out. But I'm not going to go in there and say, 'I hate Tony and I'm going to kill him and F him' and this and that. Tony's an opponent and he's in the way of my dream and that's it. It doesn't matter who's across from me. I'll fight the same way and with the same kind of attitude."

Nijem and Ferguson fight in the main event of Saturday's TUF 13 Finale at The Pearl at The Palms in Las Vegas. The main card airs live on Spike TV at 9 p.m. Eastern and also features a lightweight bout between contenders Anthony Pettis and Clay Guida, plus the return of Tim Credeur and Ed Herman, who face each other after nearly two years off a piece due to injuries.