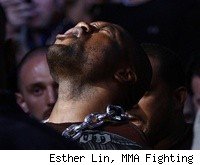 Perhaps taking a page out of EA MMA, UFC Undisputed 3, slated to hit stores in January 2012, will include a new mode with a Japanese influence -- the elements of the now-defunct PRIDE organization.

Game-maker THQ recently announced the addition of "PRIDE Mode," introducing to the game soccer kicks, head stomps and knees to the head of a grounded opponent. The announcement was also for the release date and other new features, so THQ didn't go into all the details of the PRIDE Mode, but players can expect the environment of PRIDE to be represented with smoke and lights during the fighter entrances and PRIDE commentators Bas Rutten and Stephan Quadros taking over the broadcast booth.

Of course, this won't be the first time THQ has had its hands on PRIDE. Before PRIDE was purchased by Zuffa and THQ signed a licensing deal with the UFC in 2007, THQ published PRIDE FC: Fighting Championships for the PS2 in 2003.

EA MMA was first to make a large-scale MMA game in America to include different promotions in one game. However, with the exception of Strikeforce, the other leagues were created specifically for the game. The "Mystic" organization in the game was clearly based off DREAM with Lenne Hardt as the ring announcer and even Yuji Shimada as a referee.

The Undisputed series was originally planned to be an annual series similar to other sports brands like the Madden series, but the decision was made to skip the 2011 version of the game due to lower-than-expected sales of 2010 and to allow more time for improvements in a third game.

With the WEC having since merged into the UFC, this new Undisputed will also mark the debut of the bantamweight and featherweight divisions.