If GSP-Diaz Fight Is Sign of the New 'Business as Usual,' Count Me in 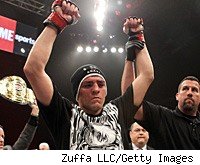 It's hard to imagine it now, but back when UFC president Dana White first used the phrase "business as usual" (many, many times) to describe what life would look like for Strikeforce after the Zuffa purchase, it wasn't a punchline. He meant it. Sort of. Maybe he even believed it, or at least he expected us to believe it.

That lasted about fifteen minutes.

Now, with the announcement that Strikeforce champ Nick Diaz will face Georges St. Pierre at UFC 137 this fall, we can finally put it to bed for good and forget we ever even considered taking it seriously. Snatching Strikeforce's champ and signing him to a new contract so he can fight the UFC champ? Not business as usual. Not even close. And we should all be very, very glad.

After UFC 129, when White was asked whether a GSP-Diaz fight was even possible under the current contracts, the big bossman replied that he could probably do whatever he wanted to do with Diaz – if he wanted it badly enough.

Translation: if fans get vocal enough about wanting to see this fight and no other, we'll move mountains to make it happen if we have to.

Fans were, so the UFC did. While a GSP-Anderson Silva superfight might get some people's motors running, putting it off in order to allow St. Pierre a chance to cement his welterweight status once and for all is the move that makes more sense. GSP-Diaz is the fight that feels like it absolutely has to happen, and now it will.

Sadly, such is not always the case in combat sports.

For instance, remember back when Diaz versus "Mayhem" Miller seemed like the bout that made the most sense for Strikeforce? You know, since Miller was an MTV star who'd been jumped by Diaz and crew on live network television, and since the two couldn't be in the same building without wanting to murder one another?

That fight would have promoted itself, but Strikeforce couldn't make it happen. Between discrepancies over the weight the two would fight at, and CBS' irrational hatred for Miller, nothing ever got done. It was a perfect moment, but the moment passed with nothing to show for it.

Or take Diaz's recent boxing ultimatum. Unless the UFC gave them St. Pierre, Diaz's manager, Cesar Gracie, told MMA Fighting in early May, his fighter was going to take his talents to the boxing ring for a bout with Jeff Lacy. Whether you think trading leather with the big gloves would have been a good idea or a horrible one for Diaz, in the end it was his decision to make. Strikeforce had given him a contract that allowed for it, so who was going to stop him?

Obviously, it doesn't serve Zuffa's interest to let Diaz get punched in the face by a washed-up former boxing champ while the UFC welterweight champ suffers from a dearth of compelling challengers, so it did what it had to do to talk him off the ledge. As Gracie put it in an interview with USA Today, the UFC "compensated [Diaz] for not boxing," and in the end it got what it wanted.

More importantly, the fans got what they wanted. The cross-promotional champion-versus-champion fight that seemed so unrealistic that it was hardly even worth talking about a year ago was now a reality with a date and a venue. While we can't pretend there are no down sides to having so much power in the MMA world consolidated under one Las Vegas roof, it's moves like this that remind us of the considerable upsides.

If Strikeforce were still its own, independent organization, sure, that would make for better negotiating positions for fighters. It would give them more options, especially in the early or late stages of their careers (see also: Dan Henderson).

At the same time, then we'd probably never see Diaz fight St. Pierre. We'd probably never get a chance to find out who the best welterweight fighter in the world was. We'd just guess and speculate and argue, which is what we've been doing for the past few years, and – honestly? – I think we've gotten all the fun we're going to get out of that exercise.

That was the old business as usual. This is the new one. And while it's not without its potential pitfalls, so far there's also a lot to like.