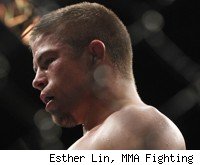 There's an exciting new entrant in the list of the Top 10 welterweights in mixed martial arts, as Rick Story earned his spot with an upset of Thiago Alves at UFC 130.

Alves has been considered a Top 5 welterweight for years, but Story took the fight to him in the first and second rounds, and although Alves showed in the third round that there are still some holes in Story's stand-up game, Story demonstrated that he has a strong chin, weathered the storm and came out on top. That kind of victory -- Story's sixth in a row inside the Octagon -- warrants a place in the Top 10.

Find out below where, exactly, I rank Story, and who the other new entrants in the welterweight Top 10 are.

1. Georges St. Pierre (1): Still the champ, the big question is whether he's going to defend his welterweight title against Nick Diaz, or move up to middleweight to challenge for Anderson Silva's belt. A Diaz fight seems to be the one that MMA fans want, and that the UFC is working hard to arrange. UPDATE: Hours after we posted this, the UFC announced that GSP-Diaz will happen in October.

2. Jon Fitch (3): The longtime No. 2 welterweight in the world is on the mend from a shoulder injury, and there's no word on when he might return. Prior to his injury, the UFC announced that he'd have a rematch with B.J. Penn next, but Jake Shields might make more sense as an opponent for him.

3. Jake Shields (2): A fight between Shields and Fitch would be the best way to determine who's the top welterweight aside from St. Pierre, and it would also be a fascinating stylistic matchup between two guys whose ground games are among the best in all of MMA.

4. Nick Diaz (5): It appears that Diaz's silly flirtation with going into professional boxing is now behind him, and the lone remaining question is whether the UFC can figure out a way to get him in the Octagon with St. Pierre. Diaz is Strikeforce's welterweight champion and one of its most popular fighters, so Showtime doesn't want to lose Diaz. But the fight that makes the most sense is a UFC pay-per-view to determine the real welterweight champion of mixed martial arts.

5. Josh Koscheck (6): There's still no word on when Koscheck will return from the ugly beating that St. Pierre put on him. Koscheck has always prided himself on being active and ready to fight at a moment's notice, so it says something about how badly he was hurt against St. Pierre that he still can't even commit to a return date, six months after the GSP fight.

6. B.J. Penn (7): Like Fitch, the man he fought to a draw early this year, Penn is injured and out of action. If his recovery and Koscheck's recovery line up and they're both ready to return at around the same time, that would make a great fight.

7. Carlos Condit (8): If the UFC can't make St. Pierre-Diaz work, Condit would probably be next in line. Other than Diaz, he's the highest-ranked welterweight who hasn't already fought St. Pierre, and he's also a likable, marketable guy who's on a three-fight winning streak and coming off wins that earned him Knockout of the Night and Fight of the Night bonuses. Condit has a tough fight with Dong Hyun Kim at UFC 132, so thinking about him as a No. 1 contender might be getting a little too far ahead of things, but in a division without many available challengers, Condit would make sense.

8. Rick Story (NR): One of the exciting things about Story is his age. At 26, he's younger than everyone ahead of him in the welterweight rankings, and he's got a lot of good years ahead of him and time to keep getting better. It might seem like the 30-year-old St. Pierre will be champion forever, but the truth is, athletes start to slow down in their 30s. Story is in his athletic prime, and I see a welterweight title shot in his future.

9. Rory MacDonald (NR): Speaking of young and promising fighters, MacDonald is only 21 years old but looked like a seasoned pro while manhandling Nate Diaz for 15 minutes at UFC 129. MacDonald is 11-1, with his only loss coming in a great fight against Condit. Next MacDonald will get another tough test against Mike Pyle at UFC 132

10. John Hathaway (NR): Hathaway is a tough guy to assess because he has great potential at the age of 23, but he's looked like he's taking a step back in his last couple of fights, a loss to Mike Pyle and a split decision win over Kris McCray. His 15-1 record includes wins over Story and Diego Sanchez, but it may be time for Hathaway to shake up his training.