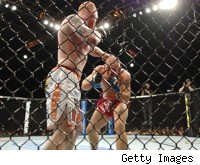 It's almost a shame Tim Credeur and Ed Herman have to fight each other at the TUF 13 Finale this Saturday night.

In another line of work, maybe. Not this one.

21 months. That's how long it's been since Credeur's last fight. Herman has him beat, but not by much. He blew out his knee at UFC 102 in Portland, Ore. just 18 days before Credeur stepped in against Nate Quarry at UFC Fight Night 19 in Oklahoma City for what would be his last bout for nearly two years.

Neither of them knew it then, but they were each in for a long wait and an emotional rollercoaster ride before they would get back in the cage again. They certainly had no way of knowing that, at the end of it all, they'd be returning against someone who had walked a similarly hard road.

"When I heard his name I thought, this is a good fight for me. This makes sense," said Herman, whose blown ACL resulted in travails that were at least somewhat typical for a pro athlete, unlike Credeur's.

Herman knew something was wrong when he felt a sharp pain in his knee after a first-round takedown by Aaron Simpson that night in Portland.

"He took my knee out in the first round, but I had never really had a serious knee injury so I didn't know what was wrong with it," Herman said. "I knew something was wrong, but I wasn't ready to bow out."

In the second stanza he tried to throw a head kick – "probably not the smartest thing I could have done," Herman can admit now – and he went down in a heap. Everyone in the Rose Garden knew the fight was over just by looking at the way he rolled on the mat, holding on to his knee like it might fall off if he let go.

Herman had surgery soon after, began physical therapy two days after that, then got right back into training as soon as he was cleared and promptly blew the same knee out again that January.

This is about the time that he started to wonder if he'd ever fight again. And if he didn't, what would he do instead? What if the knee never got back to full strength? How would he make a living? What would his future look like?

Down in Louisiana, Tim Credeur was asking himself some of the same questions, only for him the answers were even less certain. Things were looking good at first. He had a fight scheduled against Tom Lawlor at UFC 113 – his first "UFC with numbers," he recalled – but when he went in for his pre-fight medicals, that's when his plans began to unravel.

"I guess about three weeks before I was supposed to go to Montreal, they found something in my brain scan," Credeur said. "They had no idea what it was or what it could do."

They knew it was small – about the size of a freckle or a mole, according to Credeur – and they knew it was located too near to his brain stem for any kind of surgery to be a realistic option. They also knew that while they tried to find out exactly what it was they were looking at, Credeur was officially out of action.

"I just knew that I wasn't going to be fighting, and that's one of the main ways that I support my family. I was walking to my car thinking, what do I do now? Do I just go have a hamburger or something? Do I go fishing for three months? What?"

Then the phone rang. It was his wife, calling to give him some good news. She was pregnant with their first child. Credeur was going to be a father. That is, if he lived that long. If the mysterious mark on his brain that no one could tell him anything about didn't turn out to be something that would get him first.

"This phone call happened within like ten minutes of me getting out of the doctor's," Credeur said. "I mean, where do I even begin?"

So he decided not to begin at all. He told her how happy he was about the pregnancy. He didn't mention the words 'brain abnormality.' He didn't tell her that he'd be sidelined from fighting for the foreseeable future, or that he had no idea what was about to happen to him – or to their growing family.

Not at first, anyway. It didn't seem like the right time. But eventually it had to come out.

"It was kind of crazy," Credeur said. "We weren't even sure whether I was going to be around for the baby, or if I was, how I was going to support my family. Really, what I did was throw myself into my other business, which is teaching at our academy. It was kind of a blessing in disguise, because now our academy has gotten so big and is doing so well that I really don't need to fight. We've got so many great instructors and the city has really grown with the sport. It's amazing."

Eventually the doctors came back with good news. That spot on Credeur's brain? It was most likely something he'd had all his life. A birthmark, of sorts. Totally harmless.

"[The doctor] said, 'You know, I'm a brain doctor, so cage fighting with four-ounce gloves would not be my recommended life choice, but you're in no greater danger than anyone else.' That was great to hear."

Once he had the greenlight to start sparring and fighting again, Credeur soon set his sights on a June return. It seemed only fitting that he'd get matched up against Herman, who has been out just a tad longer than he has. If it takes a little while to knock off the ring rust, at least he's facing someone with the same problem, so there's no excuse.

But to Herman, it seemed like a sensible match-up for more than just one reason.

"Tim comes to scrap," he said. "That's what I like about it. He comes forward and he likes to get after it. He's not the type who's going to run from me or squeak out a win. He comes to finish, just like I do, so it's going to be a good fight and a good one for the fans, but especially for me."

But while it's nice to have these dueling storylines of long struggles through adversity, they can't both have a happy ending on Saturday night. Someone has to win, which means someone else has to lose in his big comeback fight.

And since both men are coming off losses in their last outing, the future for this weekend's loser might have still more adversity in store, and they know it.

"Honestly, if I don't win this fight, I don't deserve to be there," said Herman. "It's always kind of like that because [the UFC is] always bringing in new guys, and there's always someone else who can take my job."

It's the same for Creduer, who lost a decision but earned a $30,000 Fight of the Night bonus in his last fight. He found himself on the microphone pleading with the UFC not to cut him after that one, because he knows that exciting fights and tales of personal redemption are nice, but they aren't enough in a business where winning means everything.

"I don't care that much about Fight of the Night," said Credeur. "My wife was excited, for sure. But when I got back [to the locker room], I was still crying in the shower, no doubt about it. I'm passionate about this sport and about what I do, and a loss is a loss is a loss. There's no other way to go about it. I take them hard because there's nobody else to place the blame on. That's what I love about this sport. That's what's great about it."