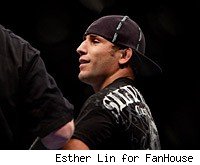 Faced with what might be one of the toughest career decisions for a mixed martial artist, Chad Mendes wasted little time in coming to a decision. The unbeaten 26-year-old featherweight contender had already been mentioned as the likely next opponent for division champion Jose Aldo. An August date had been mentioned as a possibility. Everything seemed to be lining up perfectly for his shot at gold. But then Aldo announced he wouldn't be ready by August.

With the prospective Aldo match pushed back a month or two into the fall, Mendes (10-0) had two options: train and wait, or train and fight someone else. He chose the latter, putting his title opportunity in jeopardy. But on Tuesday's edition of The MMA Hour, Mendes said it was not a particularly hard call to make for him and his team.

"We talked about it," he said. "It definitely is something we were thinking about, but I want to compete. It's frustrating to get in here and train 2-3 times a day hard, every day, and not have a light at the end of the tunnel, a fight to look forward to. That's what motivates me. Getting that opponent, knowing who it is, watching tape on him, that's what motivates me to get in and bust my butt every day. It's frustrating not knowing, so like I said, I just want to compete."

He acknowledged that the decision was made a bit easer by the fact that the bout was not yet official. Neither side had ever signed a contract. Still, Aldo-Mendes was clearly the intended direction of the promotion.

The would-be challenger said in addition to wanting to get a hard date for his next bout, he also prefers to give the champion proper time to heal rather than simply hoping he can make a proposed date.

"It's something I wanted and it's what I was pushing for, but overall if he's injured, take as much time as you need," he said. "I'd rather fight the best Jose Aldo there is and have no excuses.

"I love to fight," he continued. "I want to get in there and compete. I didn't want to wait 8-9 months if he wasn't going to fight. So I decided to go with Rani Yahya, a for-sure fight. I had the contract in front of me, so I took it."

Mendes' bout with Yahya will take place at UFC 133 on August 6 -- the same date he would have faced Aldo. The former WEC star won his UFC debut in February with a unanimous decision over Michihiro Omigawa, making it a perfect 5-for-5 in Zuffa-promoted bouts.

Yahya (16-6) is a very different fighter from Aldo. While the champion Aldo is all fast-twitch muscle, a wiry, powerful striker with capable takedowns, Yahya is a submission specialist who has 14 wins via tapout. In his last bout, he defeated former champ Mike Brown via decision.

Before that, though, Yahya had lost two in a row. The Brown fight marked his return to featherweight, and Mendes feels it's a better weight class for him, as evidenced by the way he controlled Brown.

"I think 145 is his more natural weight," he said. "You can tell he feels a lot better. He dominated Brown, and Brown's a strong wrestler. It looked like he just overpowered him. I'm not looking past the guy at all."

Given Yahya's jiu-jitsu pedigree, this could be the type of match where Mendes uses his wrestling in reverse, to keep the fight standing where he feels he has an edge. Even though Mendes admits his standup is "probably the weakest part" of his game, he adds that it's not weak at all, simply suffering in comparison to other aspects. He adds that he has no qualms in taking the fight to the ground against a dangerous submission specialist.

A win would make him 11-0, and he hopes that the sum total of all this will be the same payoff he was originally supposed to get: a matchup with Aldo.

"Honestly, it's not something that's been told to me by anyone important," he said. "I'm hoping that's what's going to happen. I honestly believe that's what I deserve. I feel like I've proven myself and if I beat Yahya, that's just another step to the title. So like I said, no one's told me, but let's keep our fingers crossed. "