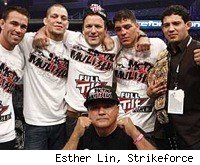 At UFC 130, Dana White didn't sound very confident that he would be able to put together the much talked about Nick Diaz vs. Georges St-Pierre super-fight. However, on Wednesday afternoon, the UFC president announced the fight was a done deal and would take place at UFC 137 on Oct. 29 in Las Vegas.

MMA Fighting spoke to Cesar Gracie, Diaz's manager and trainer, about how the deal was completed and what this means for Diaz's Strikeforce future.

A transcript of the conversation can be found below.

Ariel Helwani: How did this deal get done?
Cesar Gracie: We just sent the contract yesterday and it arrived in their office today.

Is Nick now a UFC fighter?
You know what? That's an interesting question and they have not told me how they're going to structure that.

Did Nick sign a one-fight deal with the UFC or a longer one?
We have a new deal. Multi-fight, multi-year contract with the UFC.

How many fights is the new contract for?
I can tell you it's a multi-fight, multi-year contract. I can't tell you how many fights.

Over the weekend, Dana White referred to some issues which were stopping this fight from being made. Do you know how those were resolved?
There was a lot of misinformation -- there were a lot of reports out there that weren't true. Showtime, I don't think was a problem, to be honest with you, at all. They don't have a contract with Nick. Nick's contract is strictly with Explosion [Strikeforce's parent company prior to the Zuffa purchase]. It has never been a contract with Showtime. So the reports you heard were erroneous and false. Other than that, the hurdles were the [Jeff] Lacy thing, stuff like that. I don't know if they were Strikeforce, and if they were, Nick signed a new contract that dissolved his old contract with Strikeforce.

Do you know if Showtime is getting any kind of percentage of the pay-per-view?
No idea.

Any idea why Vegas was chosen as the site of the fight?
There were two venues they were looking at: one was in Canada and one was in Vegas. We didn't know which one it was going to be until today.

Would you have been OK with fighting in Canada?
I did tell them it would be better if we fought in Vegas, obviously, because then the belt wouldn't have very much further to go once Nick gets it (laughs).

Do you think this marks the end of Nick's run in Strikeforce?
Hopefully. If he's back in Strikeforce, I would imagine that's because he lost his next fight.