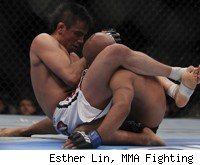 An average of 1.3 million viewers watched the UFC 130 Prelims show on Spike TV Saturday for the Kendall Grove vs. Tim Boetsch and Miguel Torres vs. Demetrious Johnson undercard bouts.

Spike TV said Wednesday the one-hour program earned a .9 household rating and was No. 1 among males 18-49 in the time slot.

Viewership increased as the show went on with more eyeballs tuning in for the Johnson-Torres bantamweight fight. Here is the quarter-hour breakdown.