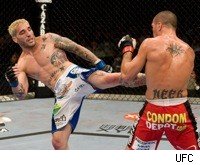 It's been a good run for UFC lightweight Kurt Pellegrino, but it may be coming to an end, at least for the near future, according to a recent post on the fighter's website.

In a posting titled, "Kurt Pellegrino stepping away from MMA...for now," Pellegrino (16-6) writes that he has opted not to renew his UFC contract because he is "choosing to take some time off and step away from the sport as a fighter."

Last May Pellegrino told MMA Fighting that he would likely retire if he lost another fight in the UFC because it would mean he would "have to start all over again...and I don't know if I can do that."

He then lost a unanimous decision against George Sotiropoulos that July, but continued on and suffered a split decision loss to Gleison Tibau at UFC 128 this past March.

"Never in my career have I lost two fights in a row and my last fight's decision in particular was especially hard for me to swallow to be honest," Pellegrino wrote on his website on Tuesday. "Even last year when i was on a 4 fight win streak I still was questioning myself. This has made me reconsider what my next step will be competitively."

Pellegrino added that he wants to "take the time to regroup, refocus, and rethink what it is that I want to do going forward," which may include competing in grappling tournaments and improving his boxing, as well as "maybe even try my hand at a pro boxing fight."

"I want to have fun training again, bottom line," Pellegrino wrote. "Most importantly I want to spend more time with my family. My daughter is four years old and I can't tell you how much of her life I've missed dedicating my life to training for fights. I did so willingly and I've made a lucrative career with the UFC, but I'm not sure I could ever say any amount of money was worth it. My wife and I just welcomed a baby boy and I can't bare the thought of missing as much of his 'firsts' as I did my daughters."

Pellegrino made his pro debut in a victorious effort against Mac Danzig at WEC 4 in 2002, and made his first UFC appearance at UFC 61 in 2006, where he suffered a submission defeat at the hands of Drew Fickett.

He racked up a 7-5 record in the UFC, but was plagued by chronic back problems in recent years, prompting him to publicly question how much time he had left in the sport.

While Pellegrino wrote that fans would "hopefully" see him back in the cage some day, he didn't rule out the possibility that this hiatus from MMA could become permanent.

"It is bitter sweet to possibly end my career on a loss and something I will have to deal with on my own, but overall it has been a rewarding 11 years for me and I want the end to be on my terms and no one else's," he wrote. "Its hard to make a decision like this, but I feel its best for me to step away for now and time will tell what the future will bring for me. I don't want to retire, but I need to find myself and find my love for this sport again."