Clay Guida: Anthony Pettis Bout Will Be a Fight of the Year Candidate 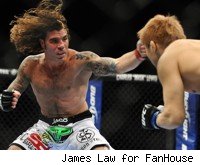 Sandwiched between two UFC pay-per-views and at the start of the busiest stretch of the year in mixed martial arts, Saturday night's Ultimate Fighter Finale is being somewhat overlooked by MMA fans.

But Clay Guida, who's fighting Anthony Pettis in the main event on Saturday night, says any fan who misses it is going to miss what may be the single best MMA fight of 2011.

Although Guida's bout with Pettis may be a brawl, he says it's no grudge match. Guida said he likes Pettis personally and admires the way Pettis approaches the sport, constantly looking to improve himself and bringing new techniques into the cage every time he fights, as he did with his "Showtime Kick" in his last fight, a win over Ben Henderson.

"I'm a fan of his," Guida said of Pettis. "I love watching him fight. He's very exciting. He has a high pace. Every time he fights he's coming up with different things. Besides the kick heard round the world he has lots of tricks in his bag."

Learning new tricks is part of why Guida moved to New Mexico and began training with a new coach, Greg Jackson. Guida made a football analogy in explaining why he's thrilled to be training at Jackson's gym.

If Guida beats Pettis, he might just become the next No. 1 contender in the UFC's lightweight division -- and possibly the next champion from Jackson's gym. But Guida says he's not focused on that.