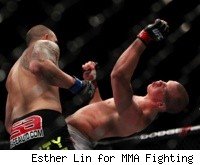 Perhaps the best thing we can say about UFC 130 is that it's over. It started out as the event that would finally put the Frankie Edgar-Gray Maynard saga to rest, and it ended up with "Rampage" Jackson in a main event bout that even he wasn't terribly excited about.

But now that the dust has settled and the Octagon has been packed away one more time, let's look back over Saturday night's action to see whose stock soared and whose plummeted into the basement of the MGM Grand.

In the wake of UFC 130, here are your biggest winners, losers, and everything in between.

Biggest Winner: Brian Stann
Sure, it makes for a great storyline to see the former Marine beat somebody up on Memorial Day weekend, but forget that for a minute. Stann took on the Sengoku middleweight champ in a fight that was supposed to be a serious test of his skills, and he practically breezed through it with the perfect mix of poise and aggression. He didn't lose his cool when he had Santiago hurt early. He didn't lay back too much and let good opportunities slip by. He did exactly what he needed to do, and he got perhaps the biggest win of his career. He also pocketed a Fight of the Night bonus, which is a nice way of reminding everyone that you were one of the few bright spots on an otherwise forgettable fight card. Plus, $70,000 buys a lot of hot dogs and apple pie.

Biggest Loser: Roy Nelson
There's no questioning his toughness or his ability to take a shot. But his cardio? That's a different story. You never want to end a round by immediately doubling over and putting your hands on your knees like an out-of-shape businessman who was forced to take the stairs for the first time in ten years. Let's just say it sends the wrong message. Nelson got overpowered and outworked by Frank Mir, but the worst part is that by the end he just seemed grateful to get out of there and go home. We've seen him go the distance before without looking like he needed to have a defibrillator handy in his corner, so I'm not sure what accounts for this poor showing. Whatever it is, he'd better figure it out quick. The UFC seems less inclined to give Nelson the benefit of the doubt that it has extended to others.

Least Compelling Case for a Title Shot: "Rampage" Jackson
The hard part about fighting a guy who the current champ already demolished is that it provides an unavoidable counter-example that your performance will be measured against. Everyone will recall that Jon Jones straight-up assaulted Hamill, while Jackson carried him the distance. Not that the fight was close, mind you. Jackson stuffed all Hamill's takedowns and put some leather on his face whenever he felt like it. Trouble is, he didn't feel like it quite enough down the stretch. He'd explode with a combo, wait to see if Hamill was still standing, then catch his breath before trying it again. It's a competent showing, sure, but not the kind that screams out for a shot at the belt. Jackson is undoubtedly one of the best light heavyweights around, but that means people are going to expect more out of him than what he showed on Saturday night. Whether he has any interest in giving it to them remains to be seen.

Most Impressive in Defeat: Miguel Torres
If nothing else, Torres proved once and for all that you just can't win a decision off your back in MMA. If it was at all possible, he would have done it on Saturday night with his many, varied attempts at a finish against an opponent who was content to hold on and maintain top position. You could argue that a takedown is an effective way of controlling the fight and dictating the action, so Demetrious Johnson won it fair and square – and you'd probably be right. At the same time, it was Torres doing most of the work to actually end the fight and/or make something interesting happen. It didn't get him the victory, but it does get him a tip of the cap, for whatever that's worth.

Least Impressive in Victory: Frank Mir
We know "Big Country" is tough to put away. The Junior dos Santos fight proved that much. But it never looks good when you have an opponent who is almost too exhausted to stand and you let him hang around for the full three rounds with his tongue practically hanging out of his mouth. At times it seems like Mir takes an unfair amount of criticism, particularly from Dana White. But then you stop and ask yourself, even after two straight wins over two name heavyweights, would I really want to see Mir anywhere near a title fight? Not unless he bought a ticket.

Most Surprising: Rick Story
With a decision win over Thiago Alves in the UFC, Story joins a very exclusive club with some strict membership requirements. He did it with a game plan that played brilliantly to his own strengths while taking Alves' mostly out of the equation, and he also proved that he can take a punch (or a knee) and keep right on coming. Alves is by far the best fighter Story has ever beaten, and he did it in a fight that really wasn't even close on the scorecards. That's six in a row for the young welterweight. He keeps this up, and things will get serious in his career very quickly.

Most Memorable: Travis Browne's KO
Whenever the 6'11" Struve gets knocked out it always makes for instant highlight reel material. Like a building being imploded, his collapse to the mat looks so awkward and takes so long that it makes a lasting impression on everyone who sees it. That's bad news for Struve, but great news for Browne, who put himself on the map with a perfectly timed Superman punch. Even if he never does anything else with his MMA career, that knockout will live on in highlight packages for years. It should also instantly erase the bitter memory of Browne's unimpressive draw with Cheick Kongo at UFC 120. Nothing like a crushing knockout to resurrect your reputation. Now let's see what he can do with it.

Least Likely to Remain Employed: Kendall Grove
The decision loss to Boetsch marked his third defeat in four attempts. What's worse, he was never really in the fight. It was takedown, top control, scramble to the feet, then rinse and repeat all night long. By the third round, everyone knew what Boetsch was going to do, yet Grove couldn't even come close to stopping it. It made for a pretty boring fight, which didn't do Boetsch any favors, but the only thing worse than winning a fight in that fashion is losing one the same way. Grove is now 7-6 in his UFC career. Most of the fighters he beat recently were later cut from the UFC, which tells you something. He's been hovering over the chopping block for a while now. My guess is the ax is about to come down.