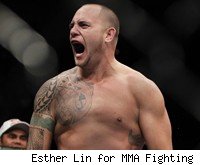 LAS VEGAS – With a massive knockout of Stefan Struve, Travis Browne got the attention of the heavyweight division on Saturday night at UFC 130. He also got a big bonus check.

Browne's Superman punch KO of Struve earned Knockout of the Night honors at the MGM Grand Garden Arena. He was joined by Gleison Tibau for Submission of the Night and Brian Stann and Jorge Santiago for Fight of the Night. Each earned $70,000 bonuses for their performances on the card. UFC president Dana White announced the winners and bonus amounts at the post-fight press conference.

In a battle of big men, the 6-foot-7 Browne charged the 6-11 Struve late in the first round with a straight Superman punch that connected on the button, dropping the Dutch heavyweight immediately. He followed it with two shots on the ground as referee Steve Mazzagatti dove in. With the win, Browne stays unbeaten at 11-0-1. Struve's two-fight winning streak was snapped, and he drops to 21-5.

Tibau pulled off the night's only submission, stopping Rafaello Oliveira by rear naked choke in the second round. Oliveira, who returned to the UFC after a 4-0 stretch outside the promotion, took the fight on short notice when Bart Palaszewski pulled out with an injury.

And Stann and Santiago were given Fight of the Night in what was perhaps a surprise. Stann won by TKO late in the second in a fight he was dominating. It was the pay-per-view's first fight and the early candidate for Knockout of the Night, but Browne went above and beyond with his knockout of Struve. So White may have wanted to have a way to reward Stann, a military hero who got the night's biggest ovation on Memorial Day weekend.