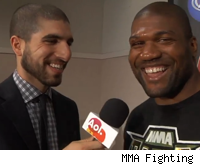 LAS VEGAS -- MMA Fighting caught up with Quinton "Rampage" Jackson following his UFC 130 win over Matt Hamill. Jackson talked how his injured hand was feeling after the fight, what's next for him and his takedown defense during the fight. He also took the time to take a few parting shots at yours truly.