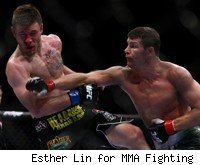 LAS VEGAS – The UFC made its coaches for Season 14 of "The Ultimate Fighter" official on Friday. And after UFC 130, it was revealed they'll fight each other on the reality series' live finale card and not on a pay-per-view, as has become customary.

UFC president Dana White said after the post-fight press conference that Michael Bisping and Jason "Mayhem" Miller will headline the TUF 14 Finale, which is likely to take place in early December.

"What we're going to do this season of 'The Ultimate Fighter' is, the coaches will fight on the finale," White said. "It's what we were planning on doing anyway. We've done it before."

White said the decision was made for just the upcoming season of TUF and wouldn't necessarily apply to future seasons. For instance, if future coaches were going to fight for a title, it likely would not take place on a TUF Finale show. After Season 4 of the reality series, coaches BJ Penn and Jens Pulver fought on the finale.

White said the process of selecting the next coaches had plenty of bumps in the road, not the least of which was Chael Sonnen's current suspension by the California State Athletic Commission. Sonnen was rumored to coach against Bisping on the show, which will feature bantamweights and featherweights and will begin taping this summer.

"When we go through the process of making coaches, there are all these different guys we look at," White said. "People were talking about some of the lighter weight champions (as coaches), but a lot of things play factor in what happens – the Chael Sonnen incident, fights, schedules, injuries.

In the end, he settled on Bisping, who coached on Season 9 against Dan Henderson, and Miller, who signed with the UFC after leaving Strikeforce earlier this spring. Miller, the host of the "Bully Beatdown" program on MTV, is a famous talker – plenty outlandish and brash. But White said it wasn't just about making good television with wars of words between coaches.

"There's more that goes into it than just, 'Are these guys going to act goofy and talk to each other?'" White said. "I'm not really into the coaches acting goofy. It's going to happen with the (contestants) anyway."

Season 13 of "The Ultimate Fighter," with coaches Brock Lesnar and Junior dos Santos, finishes its broadcast run on Wednesday with the semifinals. On Saturday, the live finale takes place at The Pearl at The Palms in Las Vegas. Lesnar and dos Santos were scheduled to headline UFC 131 on June 11, but Lesnar had to pull out with a relapse of diverticulitis. He had surgery to remove a portion of his colon on Friday, though doctors say he may be back fighting by January.