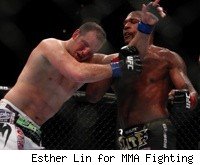 Before UFC 130, UFC president Dana White essentially confirmed that with a win on Saturday night, Quinton "Rampage" Jackson was likely to get the next opportunity to face light-heavyweight champion Jon Jones.

Well, Jackson got the win he needed, defeating Matt Hamill via unanimous decision, but now it seems that his title shot is no sure thing.

That's because after his victory, Jackson admitted that he had fought with what he described as a "fractured hand."

Because of it, Jackson will have to be sent to a doctor to assess the damage and assess a return date. Any surgery or lengthy recovery process may eliminate Jackson from the title picture for the time being.

White admitted that, saying that Jackson would have to visit a doctor and get X-rays, but if he is cleared to fight, he will be the one to face Jones.

"I can keep going," Jackson said upon hearing that.

The 32-year-old Jackson said he hurt his left hand back in December, after horsing around with friends while in Japan. He said he thought it would heal between then and now, but had a setback after re-injuring it in camp. He is expected to have it examined within the next week. Jones is himself recovering from a hand injury, and is expected to be ready to fight around September or October.

With his win on Saturday night, Jackson improved to 32-8.