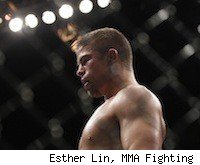 The story of Rick Story is a testament to persistence. Unlike most fighters who make it into his division's top 10, he wasn't a superstar athlete right from the beginning. In fact, in Story's freshman year of wrestling at Pacific Lutheran University, he competed in 17 matches. And he lost all 17.

When he moved into the MMA world, Story promptly lost his first fight.

When he was signed into the UFC, he was defeated in his debut.

So how did Story get from there to here? How about some good, old-fashioned hard work? After an 0-17 season, most would be downright devastated. Many would simply quit. But not Story. By the time he was a senior, he was good enough to win 33 matches and make it to the national championship match in his weight class. Guess what? He lost.

That's a lot of losing for someone who is, quite obviously, a winner, because when it comes to his UFC career, Story has handled every challenge that's come his way since his opening defeat, a judges' decision at the hands of John Hathaway in June 2009.

At UFC 130, the 26-year-old southpaw earned the biggest win of his still young career, outworking former welterweight No. 1 contender Thiago Alves in a decision win. That's no small feat when you consider that over the last five years, here's the list of guys who have beaten Alves: Jon Fitch and Georges St-Pierre. That's it.

The outcome came as a surprise not only for the result itself (Alves had been more than a 2-to-1 favorite), but for the way it came about. Though Story has earned a reputation as a solid all-around fighter, most thought his wrestling would be the key to beating Alves, a Muay Thai stylist who loves to fire off his hands and kicks. Instead, Story stayed standing with Alves for 13:39 of the 15-minute match, and outstruck him by a 101-67 margin during that time, according to Compustrike.

As has become his custom, Story showed a nice variety of standing strikes to go with his ability to take an opponent down and grind him against the cage. The result was a decision by a trio of 29-28 scores.

Afterward, Story said that he is hoping to fight one of the two men to recently beat Alves, the aforementioned Fitch. The fight, though, seems unlikely given that Fitch just underwent shoulder surgery in early May and is likely to be out of action for several months. So what should Story do in the meantime?

Well, an attempt to raise his profile wouldn't be a bad idea, because while he doesn't have a credibility problem, he does have a visibility problem.

Even though he was in one of UFC 130's featured fights, the quiet kid from Washington probably didn't get the attention he deserved. While he was invited to open workouts during fight week, he was upstaged by the presence of main event participant Quinton "Rampage" Jackson, and later essentially booted out of a question-and-answer session with the media when Jackson joined the fray.

At the post-fight press conference, Story received all of one single question. What's an upstart underdog have to do to get a little attention around here?

Well, some of the lack of awareness is his own doing. Just have a look at his Twitter page. Social media is a big focus for the UFC, and Story's avatar is a photo of him, but it cuts off at his neck, making him faceless.

If that isn't a symbol for a fighter toiling in anonymity, I don't know what is.

Winning, though, is the cure for a lot of problems. What usually follows is the athletic trifecta: increased pay, better opportunities and more exposure. On the heels of a six-fight win streak, all of those should be coming his way. But here's another thing that comes with winning: pressure. With bigger stakes come bigger risks.

Don't be surprised if Story continues to prove himself up to the task. Nothing is harder than digging your way out of a hole you made for yourself, and he's done that throughout his athletic career. Whatever you think of his game is OK. Just think something, anything about it. This is a kid who no longer deserves to be ignored.

It's easy to be good when things are always going good, but the kid who started collegiate wrestling losing 17 straight matches has repeatedly shown the ability to battle through adversity. That's an invaluable trait for a professional athlete, and it's not quite as common as you might expect at high levels of sports.

Story still has many questions to answer about his fight game as he moves into the highest echelon of his division. But one question about it has been answered for good. Despite his relative anonymity, and despite his rocky beginnings in athletics, Rick Story is a winner.