Demetrious Johnson on Why He Deserved to Beat Miguel Torres 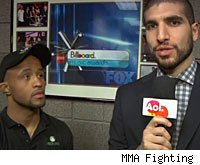 LAS VEGAS - MMA Fighting caught up with UFC bantamweight Demetrious Johnson after his close decision win over Miguel Torres at UFC 130. 'Mighty Mouse' explained why he thought he defeated the former WEC champion, which rounds he won and how he battled through an injury.

Check out the exclusive interview after the jump.