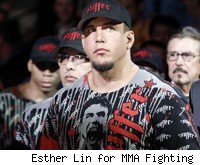 LAS VEGAS – For the second straight fight, Dana White has a bone to pick with Frank Mir, and Roy Nelson this time, too.

Mir beat Roy Nelson by unanimous decision Saturday night at UFC 130 in a dominant performance that included several knees to Nelson's head and plenty of takedowns. In his last outing, at UFC 119 last September, Mir knocked out Mirko "Cro Cop" Filipovic in the third round with a knee to the head – and that performance also left White wanting more.

Both fights had the fans vocalizing their displeasure with a perceived lack of action, and after the post-fight press conference Saturday, White elaborated on his disappointment in Mir, in particular.

"I think this time, with the co-main event I was disappointed in both guys, not just in Frank," White said. "I was more disappointed in Frank on that last card, even though he ends up getting a knockout. Frank Mir is a two-time world champion, he's been around for a long time, he's a super talented guy, and I expect more of him."

White said at the post-fight press conference that Mir went to the hospital after the fight with a fractured jaw and fractured rib, though Mir's wife said on Twitter that Mir's jaw was not broken.

As far as Nelson goes, White said he has a meeting scheduled with the Season 10 winner of "The Ultimate Fighter" later this week – and wasn't sure what the future might hold for him. Nelson has lost back-to-back fights, both decisions. At UFC 117 in August, he took Junior dos Santos the distance – the first fighter to do that with the top heavyweight contender.

White said disappointment in fights is nothing new – but when fighters are in one of the two lead positions carrying a pay-per-view, they should be ready to take the heat if their performances aren't up to his – and the fans' – standards.

"It's going to happen sometimes," White said. "If they were earlier in the card – but being in the main and co-main event is when you take the most criticism. When you're the co-main and the main event, you've got to go out there and look good. And when you don't? You're going to hear my opinion about it – and the fans and the media, I'm sure."

White said despite Mir's win, which gives him two straight, he is not currently in the running for heavyweight title consideration.