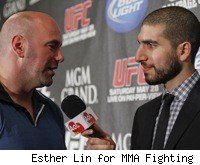 LAS VEGAS -- MMA Fighting spoke to UFC president Dana White about Saturday night's UFC 130 event, whether he felt the boos from the fans during the main event were justified, why he was disappointed in Frank Mir vs. Roy Nelson, his overall thoughts on the card, Brock Lesnar's health status following colon surgery and his pick in the Stanley Cup Finals.