After Second UFC Win, Michael McDonald Would Like to Take Some Time Off 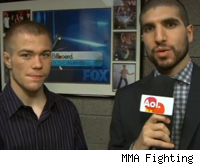 LAS VEGAS -- MMA Fighting spoke to Michael McDonald following his UFC 130 win over Chris Cariaso, his thoughts on one judge scoring all three rounds in favor of Cariaso, the injury he sustained in the fight, why he wants to take some time off and when he would like to return.

Check out the exclusive interview below.