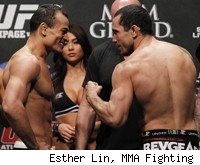 LAS VEGAS – This is the UFC 130 live blog for the three preliminary card fights of tonight's pay-per-view at the MGM Grand Garden Arena. The fights can be seen on the UFC's Facebook fan page.

The undercard features Renan Barao vs. Cole Escovedo and Michael McDonald vs. Chris Cariaso in bantamweight bouts and a lightweight fight of Gleison Tibau vs. Rafaello Oliveira. The bantamweights are all former WEC members, and Barao and Escovedo will be making their UFC debuts. Oliveira returns to the UFC after going 4-0 since his first stint. He was cut following a loss to Andre Winner in March 2010 and steps in on less than two weeks notice to replace an injured Bart Palaszewski.

Round 1: Barao comes forward early, clinches and lands a big slam. He then starts working for ground-and-pound from the top, working for position for a full minute from the top before finally moving back to his feet. He lets Escovedo up and the two restart. Barao throws a left body shot, then a right kick that has Escovedo backing up. As Barao clinches, Escovedo jumps guard and Barao slams him again. With two minutes left, he again works from on top, throwing body shots as Escovedo defends. With 1:10 left in the round, Steve Mazzagatti stands them up. A pair of nice exchanges from each is answered when Barao again is able to get a slam. From the top, he throws a tight left elbow, then fends off Escovedo's brief thoughts of a triangle. It's a good first round for Barao, and MMA Fighting scores the round for him 10-9.

Round 2: A touch of gloves starts the second. A hard left from Barao has Escovedo backing up, but he answers with a big shot that wobbles Barao. And then he throws a knee that lands to Barao's head – a knee that was dangerously close to coming with Barao grounded. Barao survives a brief offensive surge from Escovedo and gets back to his feet. Escovedo's corner yells for him to not stand in the middle, and he tries to back out. Barao throws a pair of decent kicks to the body, but Escovedo answers with a smacking one of his own. But as they clinch along the cage, Barao again moves the fight to the mat. When the action sort of stalls after a minute, Mazzagatti again stands them up. When Escovedo again tries to jump guard and pull Barao's neck in for a choke attempt, Barao takes the fight to the ground, and that's where the round ends. It's another 10-9 round for Barao on our card.

Round 3: More of the same, as Barao has a quick barrage, then gets the fight to the ground. He's been able to do very little of note on the ground, but he's scoring points with the judges. Escovedo stumbles Barao as he kicks his way to his feet, but it's of little consequence. Barao lands a nice outside leg kick, but Escovedo answers with a strike. Barao then lands a spinning back elbow, then a big teep kick. Escovedo begins looking for the kind of kicks and uppercuts that could end the fight with one shot, but Barao is blocking well. Big spinning back kick for Barao, and then he just misses a flying kick. One-two combo from Escovedo misses, and Barao catches him with a jab that wobbles him. He follows that up with another pretty big slam takedown with 1:30 left, and that is probably going to be enough to seal the deal. Escovedo will have to look for a miracle submission from here. With 40 seconds left, Barao gets out of there, then throws a pair of big kicks – he's still trying to finish it though he's ahead on points. Escovedo throws a kick, Barao catches it, and again we hit the mat. Barao wraps it up with one final slam at the horn. He gets the third 10-9 and the fight 30-27 on the MMA Fighting card.

Round 1: Cariaso opens with a left kick that is blocked by McDonald, who then throws a right to knock him off balance. After a brief slip and scrum, the fight goes to the fence with McDonald pushing, then Cariaso pushing back and switching position. After they break, Cariaso throws a nice kick. Then another that McDonald checks. Then a high left kick that McDonald again counters with a punch. Right high kick from Cariaso is blocked, and then McDonald just misses what would've been a fight-ending kick to the head – I mean, an inch away. McDonald latches on for a guillotine, but there's not much there. Cariaso is staying in the pocket and throwing nicely, but McDonald rocks him, knocks him from his feet and pounces. Cariaso recovers and goes into guard with McDonald on top looking for ground-and-pound ops. They stand up with about a minute left in the round. They trade near-misses in the center of the cage. McDonald again just misses a high kick. McDonald catches Cariaso with seconds left in the round, knocks him to the ground – and literally with a couple seconds left steals the round. It's close, but McDonald gets a 10-9 on the MMA Fighting card.

Round 2: A couple kicks from McDonald are blocked, and then Cariaso just misses a high kick, then another. They briefly clinch, but then split. A Cariaso body kick has him slipping, but McDonald lets him up. A little kickboxing scramble has Cariaso delivering a big left kick right to that one place fighters don't like to be kicked in, and Josh Rosenthal gives McDonald time. They reboot, and each miss high kicks. Cariaso puts together some nice scrambles, but he's not landing anything of consequence. They clinch and McDonald looks for a takedown against the fence. They break with 45 seconds left, but soon after a big shot from McDonald scores him the takedown, and he passes briefly to mount. The round finishes on the feet, but that late shot by McDonald gets him the round 10-9.

Round 3: Each fighter looks for some inside leg kicks in the first 30 seconds. Cariaso continues to work for kicks, but they don't seem to be doing a ton of damage to McDonald, who who either blocks them or is checking them sufficiently, for the most part. Cariaso catches McDonald with a shot to the chin when they're in tight, and he falls back into guard. Cariaso isn't doing much on top, but he passes to half-guard and McDonald eats a shot. Halfway through the round, McDonald will be trying to work his way out. He throws his legs up for a triangle, though, which is enough to scare Cariaso back to his feet. McDonald shoots and gets a takedown, but Cariaso gets his right arm and starts working for an armbar. McDonald stays calm, checks the monitors, then wriggles his way out. Back on the feet with a minute left, it's a close round. We'll see if McDonald can again punctuate the end of the frame with something that breaks the tie, so to speak. Cariaso misses a big punch, then a kick. Nothing much to end the fight. It's again close, and we'll give the third to Cariaso 10-9, but the fight to McDonald 29-28.

Round 1: Inside leg kick from Oliveira to open. He's returning after going 4-0 outside the promotion after getting cut last year. Good left-right from Oliveira, who is staying busy circling outside. Teep kick from Oliveira briefly pushes Tibau back. But soon, Tibau shoots and ges the takedown. Oliveira has a nice scramble back to his feet, though. They trade strikes as Oliveira's corner tells him to stay busy. As Oliveira throws some kicks and jabs, Tibau catches him with a nice left. Then another that stuns Oliveira, allowing Tibau to get another takedown. He works from the top out of half guard and looks for ground and pound. He gets back to his feet, but eats a left for his troubles. With 30 seconds left, Oliveira's corner tells him to "get exciting." But Tibau lands another nice shot. MMA Fighting scores the first round 10-9 for Tibau.

Round 2: Tight little shot from Tibau has Oliveira briefly on his knees, but then back to his feet with his corner calling for a 1-4 combo. Tibau shoots 90 seconds in, and again scores a takedown. Oliveira works from guard. Tibau passes to half guard and nearly takes Oliveira's back. But he gets back to his feet and grabs Tibau's right leg looking for a single-leg. Tibau almost out of nowhere lands a big shot, though, and pounces on Oliveira. He lands some ground and pound and takes his back, looking to finish as Kim Winslow moves in for a closer look. And it doesn't take long. Tibau cinches up a rear naked choke, it's tight, and Oliveira quickly taps.