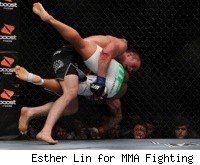 In an upset that will see a significant shift in the welterweight rankings, Rick Story surprised Thiago Alves and won a unanimous decision at UFC 130.

Although most observers expected Alves to use his outstanding striking to out-class Story on his feet, it was Story who controlled the first two rounds, and by the time Alves really turned on his striking in the third round, it was too late. All three judges scored it 29-28 for Story.

"I feel great," Story said. "It was a great fight. Alves is tough as hell. He throws some hard punches."

Story used his superior wrestling to completely control the first round, holding Alves against the fence, landing knees to Alves' legs and generally doing whatever he wanted to do. Alves has often struggled against good wrestlers, and in the first round Alves showed that that's still a problem for him.

The second round was in some ways even more impressive for Story: Not only did he continue to dominate the fight with his wrestling, but he also started getting the better of Alves in the striking exchanges. By the end of the second round Alves looked beaten down and exhausted.

Early in the third round Alves finally showed off the striking that once made him the UFC's top welterweight contender, landing a hard knee and a couple of good punches. As the round wore on Alves continued to land hard punches, but Story would shake them off and tie Alves up every time.

Story, who improved his record to 13-3, now has to be considered one of the Top 10 welterweights in MMA. Alves, who falls to 18-8, has now lost three of his last four and is no longer among the elite welterweights in the world. That's Story's territory now.