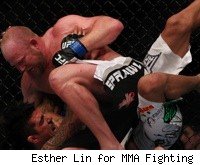 The former Ultimate Fighter winner Kendall Grove may be on the way out of the UFC after being completely dismantled by Tim Boetsch Saturday night at UFC 130.

Boetsch, who moved down from 205 pounds to 185 pounds for this fight, showed for all 15 minutes that he has great strength at middleweight, easily overpowering Grove on the way to a unanimous decision victory, scored 30-27 on all three judges' cards. Boetsch grabbed Grove and threw him to the ground within the first 30 seconds of the first round, and that's basically what he did for the entire fight.

"I'm certainly glad I did (drop to middleweight)," Boetsch said. "I felt great in there, I felt very strong."

Grove has now lost two fights in a row and three of his last four, and it's easy to see the UFC cutting him after Saturday night's performance. Grove, whose career record now stands at 12-9, hasn't had an impressive showing in a long time, and he doesn't look like he's getting any better.

Boetsch, who improved to 13-4, looked very good. He might not be a complete enough fighter to compete at the highest levels of the middleweight division, but 185 pounds is clearly the right weight class for him, and he should have some big fights coming up. He looked great on Saturday night.