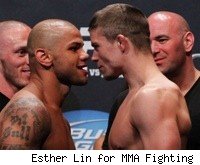 LAS VEGAS -- This is the UFC 130 live blog for Thiago Alves vs. Rick Story, a welterweight bout on tonight's pay-per-view at the MGM Grand Garden Arena.

Alves (18-7, 10-4 UFC) returned to the win column at UFC 124 in December with a dominant unanimous decision win over John Howard. That victory snapped a two-fight skid with a welterweight title fight loss to Georges St-Pierre at UFC 100 and a unanimous decision loss to Jon Fitch at UFC 117 – a fight for which Alves failed to make weight for the third time in his UFC career. Working with famed fighter nutritionist Mike Dolce for this fight, Alves weighed in at 170 on the button. Story (12-3, 5-1 UFC) has won five straight fights, including a unanimous decision win over Johny Hendricks in December.

Round 1: This has some great potential. Five-fight streak for Story coming into this one. He throws a 1-2 early. Story shoots and gets a takedown against the fence. Alves works his way back up and eats a couple knees as Story tries to keep him against the fence. Story keeps him tied up and continues with knees to Alves' thighs. He regroups, but Alves this time lands a takedown. They bounce up quickly and reset. Left from Story, and then a body shot that grazes. They clinch on the cage as Kim Winslow and her long ponytail look on. After a minute-long stretch, Winslow separates them. Again they clinch, and Story keeps working knees to Alves' legs. They split, and Story throws a big flurry of punches that Alves has to eat. Alves throws a kick in response. After they break, they trade haymakers and kicks and knees, and the crowd responds. MMA Fighting scores the first round 10-9 for Story.

Round 2: Alves opens with a kick, then a combo that just misses. Story throws a kick to the head that Alves blocks, then works for a short takedown and wraps Alves up in a bearhug when he pops back up. They break apart a minute in, and when Alves fires a leg kick, Story shoots and eventually lands another takedown. Alves easily works his way back up, and again they clinch on the fence – until Alves bullies Story to the ground. Story fights his way back to the feet, and again they clinch up. They break apart for all of two seconds before Story moves back in to work for another takedown on the fence. Winslow breaks them at 1:20 with little happening. Alves throws a left kick that Story uses to send him off balance. Alves lands on his keister, but bounces right back up ... where Story again ties him up and muscles for a short takedown. The crowd boos this continued gameplan from the 2-to-1 underdog, but it seems to be working for him. Alves fires off a couple kicks as the round draws to a close, but they're of little consequence. MMA Fighting gives Round 2 to Story, 10-9.

Round 3: Alves has likely been told he's down a couple rounds, so comes out slinging. Against the fence, he lands a nice right knee to Story's chin. But Story doesn't dro, though the sweat flies. Story again sets up a shot with a combo, but can't get the fight to the mat this time. After some more combos, Story again moves in to clinch, holds Alves on the fence and tries to muscle him down. But Alves avoids it this time and they break apart. Nice shot from Alves, and he just misses on an uppercut. Story grabs a leg for a single, but it's not there. Some nice shots from both fighters, but nothing to give either of them an edge to capitalize on. With a minute left, Story again tries for a takedown on the wall, and when they break with 30 seconds left alves throws a high kick going for the late knockout in desperation. They slug it out for the last few seconds, but neither can end it. Alves did some good work, and we'll give him the third 10-9, but the fight to Story 29-28.