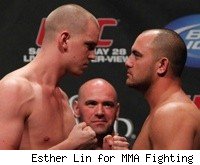 LAS VEGAS – This is the UFC 130 live blog for Stefan Struve vs. Travis Browne, a heavyweight bout on tonight's pay-per-view at the MGM Grand Garden Arena.

Struve (21-4, 5-2 UFC), the UFC's tallest fighter at 6-foot-11, has back-to-back knockout wins over Christian Morecraft and Sean McCorkle at UFC 117 and UFC 124, respectively. The Dutch heavyweight earned a Knockout of the Night bonus for his win over Morecraft. Browne (10-0-1, 1-0-1 UFC) looks to keep his unbeaten record intact. His last outing, at UFC 120 in London last October, was a unanimous draw against Cheick Kongo.

Round 1: Well, these guys are tall. There. It's out of the way. Browne opens with a pair of kicks, and Struve counters with one of his own. They then throw body kicks at the same time, and Struve follows with a flying knee attempt that backs Browne to the fence. Both guys are so tall they could reach over the fence and shake Dana White's hand if they wanted. Steve Mazzagatti breaks them up after only 20 seconds or so on the fence. Struve throws a right kick to the body, and Browne catches it and tries to throw him off balance. A teep from Struve pushes Browne back momentarily, and then they clinch – which leads to a takedown for Browne. Browne tries to make something happen on the ground, but there's not much there, and Struve gets out momentarily and works for a choke. But back on the feet, after some short exchanges, things go south for Struve in a hurry. A massive straight right Superman-like punch from Browne knocks Struve onto his back immediately, and Browne follows it with two big shots on the ground as Mazzagatti steps in.