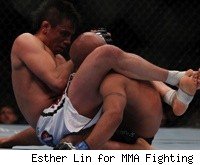 LAS VEGAS -- This is the UFC 130 live blog for Miguel Torres vs. Demetrious Johnson, a bantamweight bout on tonight's Spike TV portion of the preliminary card at the MGM Grand Garden Arena.

Torres (39-3, 1-0 UFC) has won back-to-back fights after suffering the first back-to-back losses in his career. The former WEC bantamweight champion, who is in his third fight under the tutelage of Firas Zahabi from Tristar Gym in Montreal, boxed his way to a unanimous decision win over Antonio Banuelos in his UFC debut at UFC 126 in February. Johnson (9-1, 1-0 UFC) won his UFC debut at the same event, dominating Japanese legend Norifumi "Kid" Yamamoto with 10 takedowns. Johnson stepped in five weeks ago for Torres' original opponent, Brad Pickett, and is looking for his fourth straight victory.

Round 1: Johnson bounces around and snaps out a leg kick to start. They both look to change levels, but it's Johnson who gets the first takedown. Torres quickly sweeps him to go from bottom the top. Johnson recovers half-guard, but fails in his attempt to push Torres off and get to his feet. Johnson has Torres in his open guard now. Torres tries to pass and this time it's Johnson who goes from bottom to top. Torres tries to for a leg lock, but Johnson defends and eventually regains top position in the final minute. Torres stays active from the bottom, looking for a submission, but Johnson stays safe and rides out the round on top. MMA Fighting scores the round 10-9 for Torres.

Round 2: After a brief stand-up exchange, Johnson shoots in and gets the double-leg. Torres again works the active guard, rolling for an arm and forcing Johnson to go to his back to defend. Torres can't capitalize on the position before Johnson reclaims top position. Torres nearly locks up a triangle choke from an odd angle, but Johnson stays calm and stays on top. Johnson seems to be controlling the fight, but it's Torres who's taking all the chances and engaging in all the offensive attempts. Johnson's efforts seem entirely devoted to staying on top and keeping Torres down. That's still what he's focused on as the round winds down, making this a tough one to score. MMA Fighting scores the round 10-9 for Johnson.

Round 3: Johnson opens up with a big, looping right hand that surprises Torres, then follows with a single-leg. Johnson succeeds in getting Torres down, but Torres immediately grabs for an armbar. Johnson defends and stays on top. He's been successful passing Torres' guard a few times, but can't do much with it. Torres rolls and gives up his back, but ends up going back to guard. Torres pulls off a nice sweep to land on top, but Johnson replaces guard and makes it difficult for Torres to get much offense started. Torres grabs a guillotine and it looks close for a second, but Johnson slips out. Johnson explodes with a striking flurry in the final minute, landing a couple nice knees and coming up short with a Superman punch. Torres tries one more guillotine before the final horn, but nothing doing. MMA Fighting scores the round 10-9 for Torres.