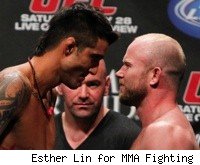 Grove (12-8, 1 NC, 7-5 UFC), the Season 3 middleweight winner of "The Ultimate Fighter," is coming off a December unanimous decision loss to former middleweight title challenger Demian Maia. The Hawaiian looks to avoid consecutive losses for the first time in more than three years. Boetsch (12-4, 3-3 UFC) is making his debut at middleweight. In his last fight, he was submitted by Phil Davis at UFC 123 in November, the first submission loss of his career.

Round 1: Boetsch closes the distance quickly, looking for a single-leg. Grove offers minimal resistance and soon ends up on his back. Boetsch tries a little ground-and-pound, but Grove gets back to his feet without absorbing much damage. Moments later Boetsch gets Grove down again and briefly works from side control before Grove replaces guard. Boetsch stands up out of Grove's guard, but this only succeeds in getting him kicked in the knee. Grove gets back to his feet and immediately ends up in the clinch. Boetsch keeps Grove pressed against the fence well into the final minute of the round. Grove breaks out, but with no time to work. MMA Fighting scores the round 10-9 for Boetsch.

Round 2: Grove tries to work the jab early on, but Boetsch does a good job of staying just out of range until it's time to close the distance and clinch. They're back up against the fence, but this time with Boetsch's back to the cage. Boetsch gets another takedown and works short elbows from side control. Grove defends well and doesn't take much damage before getting to his feet, but Boetsch puts him right back down and goes back to work. Again Grove rolls to his stomach, giving up his back just to get to his feet. Again it's successful, but Grove is starting to look a little weary in the clinch. Another takedown for Boetsch, and Grove is bloodied around the nose. Grove gets back up in the final seconds, but can't get close enough to Boetsch to unleash any offense. MMA Fighting scores it 10-9 for Boetsch.

Round 3: Ten seconds in and Boetsch gets another takedown, but can't keep Grove down. Grove doesn't have much trouble getting back to his feet, but every time he does he ends up stuck in the clinch, where Boetsch is quick to put him down again. Grove gamely gets back to his feet again and stops a Boetsch takedown attempt cold. Signs of life for the Hawaiian. Boetsch is starting to look a little worn, but he gets another takedown moments later. Grove continues to battle back, but Boetsch's takedowns are relentless. He puts Grove on his back again, but Grove manages to get up and actually takes Grove down. Impressive, but it doesn't help him much here. He has to know he's done on the scorecards and in need of a finish. They end the round on ground, up against the fence, both looking exhausted. MMA Fighting scores it 10-9 for Boetsch.