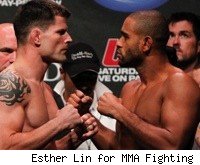 This is the UFC 130 live blog for Brian Stann vs. Jorge Santiago, a middleweight bout on tonight's pay-per-view at the MGM Grand Garden Arena.

Stann (10-3, 4-2 UFC), the former WEC light heavyweight champion, has won back-to-back fights with a submission win over Mike Massenzio last August and a TKO of Chris Leben at UFC 125 in January. The Marine military hero was given a Silver Star by former president George W. Bush. Santiago (23-8, 1-2 UFC) returns to the UFC for the first time in four and a half years. Since his release after back-to-back knockout losses in 2006, he has gone 11-1, including wins in the 2007 Strikeforce Middleweight Grand Prix and Sengoku's Middleweight Grand Prix. He left Sengoku last fall as its middleweight champion.

Round 1: Santiago circles to his right as Stann stalks in the center of the cage. Santiago misses a right hand and Stann counters with a punch combo. Santiago slips at 3:39 but quickly recovers. Stann lands a clean leg kick with just over a three minutes left. Stann is timing Santiago's straight right to set up his own combo. Stann lands another effective leg kick. Santiago misses a head kick that gets a rise from the crowd. Stann comes forward with a straight right and connects with a left hook that drops Santiago. Stann rushes in looking for the ground and pound finish. Santiago attempts to hold down Stann but Stann is delivering big right hands. Stann slows down his attack for a more methodical ground and pound attack. Stann finds an opening with a barrage a right hands and allows Santiago back to his feet. 10-8 Stann.

Round 2: Santiago times a kick attempt and rushes in looking for the takedown, but has to settle for pressing Stann against the cage. They separate soon after and Stann delivers a leg kick. Stann stumbles Santiago. Santiago changes levels and ties up, only to quickly separate. Stann counters with a nice right uppercut. Santiago swings with a spinning back first but tastes Stann's straight left instead. Stann catches a kick and holds Santigao's ankle for a while before allowing Santiago to regain his footing. Santiago jumps for the flying knee but slips on his butt. Santiago gets a nice overhand right in as a counter from a leg kick. Stann drops Santiago with a right hook. Stann follows with huge right bombs and Santiago is out. Referee Herb Dean gave Santiago plenty of time to recover, but was forced to make the stop.