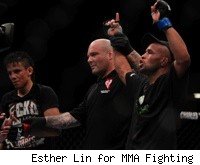 A tough, hard-fought contest at UFC 130 led to a new star in the bantamweight division taking a big step forward, as Demetrious Johnson won a unanimous decision over former bantamweight champion Miguel Torres.

The first round was a great jiu jitsu chess match on the ground, with Torres and Johnson trading dominant positions but Torres spending most of the time controlling things, twice getting into side control and also threatening Johnson with submissions, both with a knee bar and a heel hook. Johnson held his own with Torres, but it was a first round that Torres won.

The second round was also fought mostly on the ground, but this time it was better for Johnson, who used his strong wrestling to gain dominant positions while Torres tried, unsuccessfully, to attack off his back and hurt Johnson.

At the start of the third it appeared that Johnson would have similar success, as he secured a takedown and got top position, but Torres swept Johnson with about two minutes left in the fight, getting into full mount. Torres wasn't able to hurt Johnson in the mount, however, and the final minute and a half of the bout was a back-and-forth trade of dominant positions.

It was a tough fight to judge, but all three judges agreed that Torres won the first round and Johnson won the second and third.

The victory improves Johnson to 9-1 in his professional MMA career, and inches him closer to a shot at the bantamweight title. For Torres, who drops to 39-4, it's back to the drawing board: He's one of the best ever to fight at 135 pounds, but he has now lost three of his last five fights, and the bantamweight division may have passed him by.