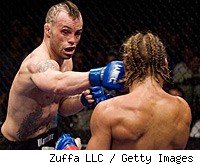 Pulver took the fight to the floor late in the first, only to have opponent Brian Davidson take his back for the rear-naked choke at four minutes and 14 seconds.

Quick results of all the Titan FC 18 fights after the jump.

In the co-headliner, UFC veteran and three-time NCAA wrestling champion Jake Rosholt suffered a tough loss when he was disqualified in the third round against John Ott due to an illegal knee to a grounded opponent. Up until that point, Rosholt was winning the fight and arguably should have already won by TKO due to the amount of damage Ott received.

The 28-year-old Rosholt was joined on the card by his younger brother Jared, who improved to 3-0 with a first-round TKO victory.

Notes: Drew McFedries was forced off the card due to an infection ... Rory Markham withdrew after accepting a movie role.