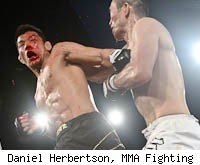 Former pacific rim champion Kenichiro Togashi's suger-sweet jab again led him to victory on Friday night as he out-boxed Shin Kochiwa from the southpaw stance in the main event of Shooto Gig Tokyo 6 at Shinjuku Face in Tokyo, Japan. Three long rounds of jabs and counters bloodied a helpless Kochiwa and it wasn't until the final 30 seconds of the last round.

Hawaiian wrestler Guy Delumeau exploited the weakness of Yusuke Yachi, taking the promising Krazy Bee striker down time and time again to grab the unanimous decision. A brief moment on the feet was capitalized on by the 2009 rookie champion as Yachi landed a huge high kick against the ropes in the second stanza. After the shin to the face Delumeau took no more risks and cruised his way to the decision via his dominant top control.

Haruo Ochi dramatically derailed 2010 rookie champion Kosuke "Rambo" Suzuki scoring an incredible come from behind knockout. Suzuki dominated the majority of the fight, landing strikes at will and humiliating Ochi with constant submission attempts but late in the second round, Ochi landed a flying knee followed by a hook that crushed Suzuki and sent him unconscious to the canvas.

Full results after the break.