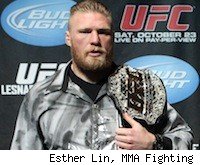 UFC president Dana White said on Saturday night that Lesnar's operation was a success, that he reported feeling great afterward and that he hopes to be back by January of 2012.

"Lesnar, a lot of people thought he might not recover from this, including him," White said. "But he's going to come back. This guy's accomplished a lot of great things in a short amount of time."

Lesnar was first diagnosed with diverticulitis in late 2009, forcing him out of a proposed bout with Shane Carwin. At the time, surgery was considered an option, but a change in diet improved his situation and he soon resumed training. He returned to the octagon in July 2010, defeating Shane Carwin in a back-and-forth bout that finished in an arm triangle submission.

As the coach on the current season of The Ultimate Fighter, Lesnar was supposed to fight competing coach Junior dos Santos on June 11, but a second bout with the illness caused him to withdraw. After treatment at the Mayo Clinic in Minnesota, doctors decided to remove a piece of his diseased colon and reattach the existing parts.

At this point, Lesnar's projected New Year's return is only an early estimate, as recovery time for the operation varies and few top-level athletes have ever had to recover from the invasive procedure.