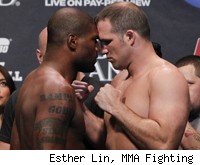 LAS VEGAS – The near-lovefest that has become UFC 130 came to a partial stop Friday at the official event weigh-ins at the MGM Grand Garden Arena.

Main event fighters Quinton "Rampage" Jackson and Matt Hamill each weighed in at 205 pounds for their bout, then engaged in the afternoon's most intense staredown. It was a stark contrast to Wednesday's press conference, where the two shared a couple light moments on stage even before their staredown photo op.

When the fight was booked, Jackson was vocal about not having much interest in the fight. But after Hamill said he planned to break the former light heavyweight champion's will, Jackson took a new level of motivation. And Wednesday's cordiality went out the window Friday in favor of a forehead-to-forehead showcase, Hamill's hands up and Jackson's at his sides.

Hamill told emcee Joe Rogan that the fight against Jackson will be the most important fight of his career.

"This is the biggest opportunity for me to help my career," Hamill said. "I know from Day One he didn't want to fight me, but I promise you one thing – it's going to be a good fight."

Jackson, who doesn't have a knockout win since his UFC 92 victory over Wanderlei Silva, promised fans he's looking for a finish against Hamill, and that Hamill's comments about breaking his will got him amped up.

"It motivated me to train extra hard," Jackson said. "I was already training hard 'cause it's been a while since I knocked anyone out. But I'm ready to put on a show for you guys and get a knockout."

Co-main event heavyweights Frank Mir and Roy Nelson, though, continued to be almost playful about their fight. The two Las Vegas residents, who share many mutual friends and sometimes train together, each weighed in at 260 pounds, and fought back smiles as they squared off.

Making his return to the UFC after an absence of four and a half years, Jorge Santiago, who most recently was Sengoku's middleweight champion, weighed in at 185 on the nose for his middleweight fight with military hero Brian Stann. Stann was 186 on a Memorial Day weekend card that he has said will be emotional for him as a veteran. That bout opens Saturday's pay-per-view.

And despite trouble making weight in the past, Thiago Alves weighed in at 170 pounds for his welterweight bout against Rick Story, who was also 170 and brings a five-fight winning streak into the event.

UFC 130 airs live on pay-per-view at 9 p.m. Eastern on Saturday and is preceded by a pair of fights on Spike TV at 8 p.m. In addition, three preliminary card fights will air on Facebook at 6:20 p.m.

The official weigh-in results are below: