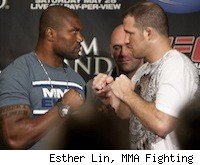 LAS VEGAS -- The UFC 130 main event match between Quinton "Rampage" Jackson and Matt Hamill was not supposed to be. Jackson didn't want it, and it's not so difficult to understand why. Hamill wanted it, and it's obvious why. For one man, there seemed to be plenty to lose with little potential upside, and for the other, it would be his first opportunity to show he belongs among the elite. That makes for one of the most classic storylines in sports, but will it make for a classic fight?

As it turns out, the stakes are much higher than originally anticipated. As reported on Wednesday, Jackson is likely fighting for a chance to compete for the championship later this year. What once seemed like a lose/lose situation for him is now bursting with opportunity.

And for Hamill, he not only has the chance to play spoiler, but also to inject himself into the title picture. A victory over Jackson would give him six straight while marking his most meaningful win.

A look at their styles show that Jackson and Hamill aren't so different. Both began with wrestling as their dominant trait but have moved to a striking-heavy style. Both have heavy hands, and each has the ability to take the fight down when he wants to. Neither wants to all that often, though, which should mean this match is determined on the feet.

When it comes to the striking game, Jackson is more dynamic, though he sometimes holsters his kicks and relies on his formidable fists. Working with Muay Thai coach Lance Gibson, though, Jackson seems to be aware of the issue and in his last fight with Lyoto Machida, threw a higher ratio of kicks than he had in recent contests. According to Compustrike, of his standing strikes, about 19 percent were kicks, almost double his usual ratio.

A diverse Rampage is a dangerous Rampage, but really, a motivated Rampage is a dangerous Rampage. So is he motivated? While he made headlines over the last few weeks by saying he's not overly excited to face Hamill, he seems to be in a good state of mind during fight week, fit and lean, smiling and joking. He's even talked about winning to again win a championship, something he once said he didn't care much about.

Jackson gets quite a bit of flack for saying things that are sometimes outlandish or controversial, but the fact of the matter is he's still an elite fighter. Over his last 11 fights, he's 9-2, with wins over former UFC and PRIDE champs like Lyoto Machida, Wanderlei Silva, Chuck Liddell and Dan Henderson. And neither of his losses has been overly one-sided. Rampage is just a hard fighter to beat, because even if he doesn't come into the fight in optimal shape, he's always going to have fight-changing power, making opponents leery of engaging him.

That's borne out in the stats. A look at Compustrike numbers show that in standing arm strikes, Jackson has out-landed opponents 49 percent to 29 percent over his eight UFC bouts. Now, why is that? Jackson is not a fighter than runs away. He's not super-elusive. But he's not a guy you want to stand too close to. Even if you miss your punch, at least he might not hit you back with a counter.

So where can Hamill attack? While he has heavy hands, most would agree that Jackson's are heavier, and faster. One place Jackson is quite susceptible is with kicks. Opponents land 67 percent while throwing three times as many kicks as he does. Problem? Hamill rarely throws kicks. In his 10 UFC fights, kicks make up just 7 percent of his standing strikes, a number far below the average of top-level fighters. Even Jackson, who many consider boxing-heavy, throws kicks 11.5 percent of the time.

Where else can Hamill win? Everyone knows about his wrestling background, and he's connected on 71 percent of his takedown tries during his UFC career, a very good number. But Jackson is going to be no easy target. His opponents are only successful 36 percent of the time.

That leaves limited options for Hamill. If the fight stays standing, Jackson will likely have the edge. Hamill has said he plans to employ his wrestling and test Jackson's defense, and that seems to be the right plan, because even if he doesn't take the fight down, he can force Jackson into a physical fight and hope that his conditioning lets him take over late. If he does get him down, he might be able to control him and grind out some points. Jackson has been so durable over his career that it seems unlikely Hamill will stop him.

The reverse does not seem so unlikely. Hamill was in serious danger of being stopped by Jon Jones before a disqualification cost Jones the match. He was also stopped by Rich Franklin, though that fight was nearly three years ago. Of course, past performance is no indicator of future success, but it's all that we have to go on as far as projecting what may happen. Hamill says he's bringing his full game together at the right time, and it's certainly possible he will step up to the biggest moment of his career.

By most objective measures, though, Jackson should win. He is more experienced, is a sharper striker, has an excellent chin, and the takedown defense to keep Hamill upright. Jackson seems like he's in a good frame of mind, and I expect to see it reflected in his performance. Jackson via second-round TKO.