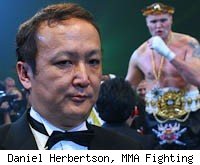 The war between the two largest kickboxing promotions in the business, It's Showtime and K-1, continues to escalate.

In a statement posted to It's Showtime's website, the European-based promoter has claimed that the Japan-based K-1 owes It's Showtime contracted fighters more than $400,000 and that K-1 president Sadaharu Tanikawa has made threatening phone calls to fighters planning to fight outside of K-1 and as a result of this, It's Showtime will be taking legal action.

Among those who are owed money are Giorgio Petrosyan, Tyrone Spong, Hesdy Gerges, Daniel Ghita and Melvin Manhoef and It's Showtime president Simon Rutz claims there are more waiting for money.

"After years of being loyal to K-1 (FEG) regarding the late payment, or no payment at all, to our fighters, we would like to release the following statement.

For more than half a year K-1 owes us more than 400.000 US dollars in total because several fighters which we represent have not been paid. Every time we were asked to have more patience because a potential investor would be interested to take over K-1.

Until now, we have never contacted a lawyer to claim our credits because we granted K-1 the time they need to financially recover. However, we were very surprised to hear that DREAM and K-1 want to organize a number of smaller events. In our opinion that isn't possible before K-1 first pays its debts to fighters which already have fought. Therefore, now is the time for us to hire a lawyer.

We can only describe the way K-1 has been managed the last years as amateurish and almost as deceit. If we hadn't put a huge amount of pressure on K-1 just before the K-1 World Grand Prix Final of last year, some fighters would have been even more financially struck.

Even if an investor for K-1 will appear, we really hope that Mr. Tanikawa will take a management course first, otherwise the invested money will disappear like snow in the sun.

These are only the fighters which are represented by us. However, also a lot of fighters are still patiently waiting for their money. We would like to emphasize that it's incorrect that K-1 even organizes events without paying their debts to these fighters."


It's Showtime have been co-promoting events with K-1 for many years now but as the Japanese giant falls, It's Showtime is clearly ready to swoop in and take over the title of the world's leading kickboxing event. It's Showtime-contracted fighters coming forward and complaining about late payment led to K-1 president Sadaharu Tanikawa declaring that "Simon Rutz killed K-1," and the July 18 "It's Showtime Japan" event already has it's headliner in 155-pound K-1 ace Giorgio Petrosyan taking on HINATA. Although Petrosyan is an It's Showtime-contracted fighter, until this point he has only fought for K-1 in Japan.

As the UFC is synonymous with MMA, K-1 has been synonymous with kickboxing since the beginning of the K-1 World GP in 1993. However, since the end of the Japanese martial arts "boom" in around 2005, the promotion has fallen on hard times due to rapidly falling popularity and questionable decisions from management.