Eight Ways of Looking at UFC 130 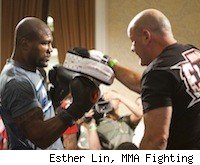 With UFC 130 just a day away, we look at what constitutes a main event, what becomes of former champs in both victory and defeat, and so much more.

I. "Rampage" Jackson could be auditioning for a title shot, not just fighting for one. It's still unclear who will get the first crack at UFC light heavyweight champ Jon Jones, but it's not hard to imagine that a Jackson victory on Saturday and an Evans loss (or even mediocre victory) in August could result in a Rampage-Bones title fight in the fall. But in order to effectively sell Jackson as legitimate competition for Jones, the UFC needs a convincing performance out of him here. If Jackson barely squeaks by Hamill (who Jones destroyed so thoroughly he ran out of legal strikes to hit him with) the way he barely squeaked by Machida, how many people are really going to be interested in seeing him fight the champ? Jackson can always sell a fight with his mouth – when he feels like it, anyway – but with three straight decisions under his belt, it'd be nice for him to show that he can still sell one with his fists, too.

II. Is Miguel Torres tired of fighting guys who come up to his nipples in the pre-fight staredown? At 5'9", Torres is practically the Stefan Struve of the bantamweight division. Demetrious Johnson will be the fourth straight opponent he's faced who hovers in the 5'3" range (Joe Benavidez is officially listed at 5'4", but then Shane Carwin is listed at 6'2", so go figure). Last time out Torres was content to hide behind his long jab and ride it all the way to the scorecards for an easy win. It wasn't his most popular effort, however, which makes you think that this time he may be tempted to mix it up more for the sake of the crowd. Against the speedy little "Mighty Mouse," that could be a dangerous, though perhaps necessary gamble. Torres has two straight wins under his belt. The third could be the charm, as long as it's not another snoozer.

III. With no more title fight at UFC 130, time for the UFC to make chicken salad out of chicken...well, you know. Let's face it, fans are being asked to pay main event prices for a show that's essentially all undercard. Don't get me wrong, there are still some exciting scraps lined up for Saturday. Jackson-Hamill? Nelson-Mir? Those fights both feature former champs, and both have future implications...probably. At the same time, neither can be confused for a true, honest to goodness, call-in-sick-to-your-own-wedding type of main event. For some fans, that's also going to mean it's not worth the fifty bucks to stay home on a holiday weekend Saturday night and watch it. The UFC has to expect that, but injuries happen, so what are you going to do? The answer, I suspect, is take this one on the chin and move on to Vancouver. Sometimes you eat the chicken salad, and sometimes, well, the chicken salad eats you. I think that's how the saying goes, anyway.

IV. If Frank Mir can't beat Roy Nelson, then what? Mir is a former heavyweight champ who poses serious problems for most of the big men on the UFC's roster, but he's also a train that may be running out of track. He's been beaten by both Lesnar and Carwin. He holds victories over also-rans like Kongo and faded legends like Cro Cop and Big Nog. If he can't beat "Big Country," he can pretty much forget about a heavyweight title shot any time soon. Mir just turned 32, so it's not as if he can afford to wait around in the division until the wind shifts again. It's strange to think that the situation might be so dire when he's coming off a knockout victory, but then again, how bright can Mir's future in the UFC really be if he loses on Saturday?

V. Rick Story is about to take a serious leap up in competition. The question is, is he ready for it? His five-fight win streak inside the Octagon is impressive, but who's the best welterweight he's beaten so far? Johny Hendricks? Brian Foster? No offense to those guys, but Alves is in an entirely different class. Two men can claim victories over "Pitbull" in the last half-decade: Georges St. Pierre and Jon Fitch. Alves is a solid little ball of muscle who's tough to takedown (unless you happen to be one of the two best takedown artists in all of MMA) and who can kick your legs into jelly if you stand with him. So how does Story – who is not a Fitch-level wrestler or an Alves-level kickboxer – win this fight? I have no idea, but it should be interesting to see what he comes up with.

VI. On paper, anyway, Matt Hamill is riding a five-fight win streak. Of course, that includes the DQ win over Jones, and even the popcorn venders in the cheap seats could tell he wasn't going to be celebrating that one at the after-party. Still, imagine he wrestles his way to a decision over Jackson. Imagine he's got six consecutive W's on the scoreboard. Imagine what it says about the real meaning of this fight that he still wouldn't even be in the conversation about potential title contenders at that point, and we all bloody well know it.

VII. What does an MMA heavyweight look like? From the corpulent, straight-outta-the-trailer-park look that Roy Nelson has cultivated, to the extremely tall, pale, and Dutch-as-he-wanna-be Stefan Struve, there's a range of heavyweight body types on display this weekend, with Frank Mir and Travis Browne hitting the points in between. Maybe somewhere in there is a look at the future of MMA heavyweights. Or maybe that's just what happens when a weight class spans sixty freaking pounds and a foot or so in height.

VIII. Just maybe, Brian Stann is the UFC's real American hero at middleweight, and right when it needs one. You look at the former Marine with the square jaw, the 'aw shucks' demeanor, and a fighting style that ensures someone will probably get his face broken, and you start to wonder if the UFC didn't order him straight from central casting. The guy is practically a walking cartoon character of a butt-kicking, Apple pie-eating boy next door. He is, in other words, a godsend for the UFC. Imagine the perfect pro wrestling-esque storyline the writes itself as soon you match Stann against someone like Michael Bisping. Stann salutes the flag while helping old ladies across the street. Bisping dons a soccer jersey and begins sneeringly referring to Stann as a 'colonial.' I'm telling you, that kind of theatre is so priceless, the fight is almost secondary. First though, Stann has to get past Santiago, which is where things could veer wildly off-script. The former Sengoku champ can still swat – just ask Kazuo Misaki. It's a tough draw, but if Stann pulls out the win, look for the big push to start the moment his hand gets raised in the Octagon.