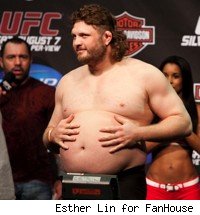 With UFC 130 in Las Vegas just a couple days away, it's time that we looked at the main card match-ups the way Vegas sportsbooks intended us to: with eyes that are blinded by opportunistic greed.

Oddsmakers have already weighed in on Saturday night's fights. Now let's double-check their work and see if we can't find some holes in their logic.

It is not at all unreasonable to think that Hamill could pull off an upset by out-working and out-hustling Jackson on Saturday night. If he puts his wrestling to work, keeps Jackson either on his back or pinned against the fence, Hamill could certainly pull off a decision win much like Rashad Evans did. That's totally plausible. It's also the kind of thing you talk yourself into believing once you see the chance to jump on a 2-1 underdog. Jackson is the better all-around fighter here. As much as I wonder about his career motivation, I don't have serious doubts that he's done the work in the gym. He should be able to stop Hamill's takedowns and force him into a boxing match. And yet, Hamill's resiliency and dogged determination can keep him in this fight until the end. At these odds, that might be all the excuse I need.
My pick: Hamill. There are lots of ways for this choice to go wrong, but 2-1 against a fighter with as many question marks as Jackson is too good to pass up. That's why they call it gambling, people.

The smartest thing Mir could do is to disregard public opinion altogether. Fans (and Dana White) didn't like your fight with Cro Cop? So what. Go in there against Nelson, pressure him in the clinch, try and put him on his back, lean on him in close and wear him down in a slow grind. People aren't going to like it, but at least you'll win. At least you won't have to find out how that right hand feels on your jaw. Good enough, right? But no, Mir's not that kind of smart. Regardless of what he says, he cares too much what people think of him. He'll try to make a show out of it, and the more time he spends standing across from "Big Country," the worse his chances get.
My pick: Nelson. He's only a slight underdog, but it's enough to justify putting faith in his power. Coming off the Cro Cop fight, I question whether Mir would rather win to the sound of boos or lose to the sound of cheers.

As part of the UFC's continuing effort to match the 6'11" Struve against fellow giants, in comes the 6'7" Browne, who is still a bit of an unknown quantity. Browne ran through James McSweeney, but stalled against Cheick Kongo. He seems like more of a step sideways for Struve rather than a move up the ladder, so I'm a little surprised to see the Dutch beanpole as a slight underdog. If it stays standing, Struve wins this. If Browne puts him on his back, well, we've seen in the past that that strategy has dangers of its own. Unless Browne has more arrows in the quiver than what we've seen of him so far, which is entirely possible, I don't see him winning this.
My pick: Struve. At +110, he'll make a nice addition to any parlay.

Story has plowed his way through most of the mid-level welterweights on the UFC roster, but now he's in with the big boys. Alves has only lost to two people in the last five years, and they were Georges St. Pierre and Jon Fitch. Story is a talented, aggressive fighter, but is he really on that level? I doubt it. Judging by the betting line, oddsmakers doubt it too. Alves seems to have put his weight struggles behind him, so as long as he doesn't have to kill himself to make 170, chances are he'll be ready to put a hurting on Story and remind him just how far he still has to go.
My pick: Alves. -250 still seems a little high, but it's good enough for the parlay.

Stann is a solid technician who does things right and knows how to stick to a game plan. Santiago is a little wilder, like a wind-up toy you set in motion and get the heck away from. I'm not saying that fighting Santiago is going to be like having another go with Chris Leben for Stann, but, well yeah, it'll be sort of like that. That worked out well for Stann last time, and unless he gets clipped early I see him putting on a repeat performance here. You can't count Santiago out entirely, but it's Stann's fight to lose, and one that will propel him to the next level if he wins.
My pick: Stann. It's another one for the parlay, but I feel pretty good about this one.

- Demetrious Johnson (+105) over Miguel Torres (-135). As much as I like Torres and his irrepressible mullet, Johnson will wear him out with takedowns en route to a decision.

- Tim Boetsch (+110) over Kendall Grove (-140). If Boetsch can take this into the later rounds he should be able to put his power to work and grind Grove down, maybe even finish him in the third.

- The 'For Entertainment Purposes Only' Parlay: Struve + Alves + Stann + Johnson.