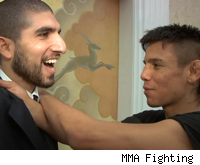 LAS VEGAS -- MMA Fighting spoke to Miguel Torres on Thursday about his UFC 130 fight against Demetrious Johnson, how he expects to fight Johnson, his evolution as a fighter and his plan to form MMA's version of "Super Friends." Torres also discussed his mental state heading into to Saturday night's fight.