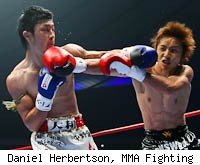 TOKYO, Japan -- Not to be outdone by sister promotion DREAM, K-1 is finally set to return after a 6-month hiatus. Promotional president Sadaharu Tanikawa on Thursday announced the K-1 WORLD MAX 2011 63 kg Japan Tournament to be held at the Yoyogi Stadium 2nd in Tokyo on June 25, and similar to DREAM, it will be a "Fight For Japan" charity event.

Remarkably, the event is set to stream via the internet with no TV deal of any kind in place, locally or abroad. The full card and details of K-1's first event of 2011 after the break.

Also announced was a 70 kg super-fight featuring 2010 70 kg World GP runner-up Yoshihiro Sato versus 2002 K-1 70 kg World GP champ Albert Kraus. The K-1 veterans have met in the ring on two prior occasions with Kraus taking decisions in both cases.