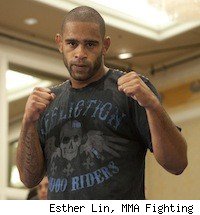 LAS VEGAS -- It was back in 2006 when Jorge Santiago was cut from the UFC after suffering back-to-back knockout losses at the hands of Chris Leben and Alan Belcher. And it was no sooner than he received his pink slip when he began plotting his return.

That's not exactly a new story. Most fighters who are cut want to return. Many find their way back, but most don't. And then there is Santiago, who left the promotion a 12-7 journeyman, and returns after an epic run, and as one of the world's top-ranked middleweights. Now, that ... that is a story.

Since the December 2006 day he last walked out of the octagon, much has changed in MMA, and around the world. The UFC has exploded in popularity. Santiago reeled off an 11-1 stretch. The U.S elected its first African-American president. Natural disasters have devastated several corners of the world. Much change. But there's been one rock of stability. When he left, Anderson Silva was the UFC middleweight champion, and he's still the champ now.

That is situation Santiago hopes to one day change.

"I do this full-time. This is my life," he said. "I didn't come here to hang out. I've come here to show my worth. I work hard to show it, and when i deserve it, I would love to have a shot."

Since leaving, Santiago has been one of the hottest fighters on the planet, and arguably the most successful middleweight aside from Silva, losing only once to Mamed Khalidov, a well-regarded European fighter who has received UFC interest in the past. Santiago later avenged the defeat in a rematch. Santiago also helped author the fight that many believed was the best of 2010, finishing Kazuo Misaki in the fifth round of an August classic.

Yet due to his first run in the UFC, there are questions about where exactly he stands in the middleweight landscape. Some believe that first run is more representative of his talent, while others cite his recent career stretch as proof of a matured, relaxed fighter.

Santiago says now that he never had any doubts that he'd find his way back to the octagon, and that during this event week, he feels comfortable and relaxed, as though this is where he's meant to be.

"As soon as I left, I worked so hard to get back here," he said. "It was a great opportunity. I went to a few places, to Japan and Europe. It just came at the right time. I realized the big mistake I made. This is the biggest show in the world, UFC."

Until recently, Santiago was a member of the vaunted American Top Team stable, and he said at times it was hard to watch his friends and training partners on the stage on which he wanted to perform. Since he's experienced the UFC before, he doesn't expect to face any extra jitters, and can focus on his UFC 130 fight with Brian Stann.

This was the first camp Santiago underwent with his new team, Imperial Athletics. He had alongside him on a daily basis, Rashad Evans, Antonio "Bigfoot" Silva and Gesias "JZ" Cavalcante, among others. While the rugged Stann, coming off his KO win over Chris Leben, is considered a favorite in the fight, Santiago is looking forward to another bout against a game fighter, and starting the process of establishing himself in the promotion he never wanted to leave.

"He's the kind of guy, he fights with his heart," Santiago said. "He's a warrior. He's a U.S. Marine, so he's a warrior. He'll fight all over the place. Ground, cage, on his feet. I'm the kind of fighter who will accept everything, but I'm going for the finish. I'm not going with the mind to fight 15 minutes. This is the goal: finish."