Frank Mir, Roy Nelson Put 'Friendship' to the Side at UFC 130 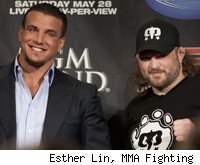 LAS VEGAS – Much is being made in the buildup to UFC 130 on Saturday about the friend vs. friend heavyweight bout between Frank Mir and Roy Nelson.

Make no mistake – the two Las Vegas natives and residents and frequent training partners are far from enemies. But as Nelson said Wednesday, let's not take this whole "friends" thing too far.

"It would be different if we were really friends – best friends," Nelson told MMA Fighting prior to the press conference for Saturday's pay-per-view at the MGM Grand. "There's a difference between business acquaintances and friends. I consider a friend any time we eat together at the same restaurant, or he's eaten at my house or I've eaten at his house. We train together – jiu-jitsu. It's like (a reporter) who interviews me – does that mean we're friends too?"

Thirty minutes later on the press conference dais, the two seemed chummy enough. And they even mock-hugged before their pose-down photo op. But Mir said for this particular fight, it affects more than just the two of them in the cage – it's the people in their inner circles.

And that, Mir said, affected how he approached the fight – not wanting to make any comments about Nelson, even in jest, that their mutual friends would take the wrong way.

"I think I've kind of kept, on purpose, any kind of poking or badgering to a minimum, not because I didn't want to fight him," Mir said. "I know Roy gets it. I get it. It's the close friends around us that I worry about that I'm going to have to see 20 years from now, people who are a godfather-of-my-kids-who-train-with-him type of scenario."

Nelson (15-5, 2-1 UFC), the Season 10 heavyweight winner of "The Ultimate Fighter," beat Mir eight years ago in a grappling tournament that had slipped under most radars until it was dredged up from the archives after the fight was booked. But both have acknowledged they're two completely different fighters than back then.

Mir, Nelson and UFC president Dana White joked Wednesday about the fight booking causing mini-battles over gym schedules and who would wear what color shorts on Saturday. But Mir (14-5, 12-5 UFC) said despite not having any lunch dates planned with Nelson, he's still traversing new territory with this fight.

"This will be the closest I've ever been to any of my opponents," Mir said. "I'm cordial with everybody – I try to be. But it's a fight."

Nelson said in this particular case, it all just comes down to one thing: Friendship may be friendship, but business is business.

"It's just one of those things," Nelson said. "You'd prefer to fight somebody that you really would rather derail their whole career. I have no ill will toward Frank. But it is what it is, and if the UFC wants you to fight whoever, then that's what you do to get paid."