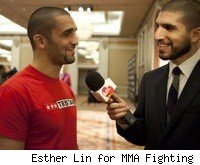 LAS VEGAS -- MMA Fighting spoke to trainer Firas Zahabi on Thursday about the Miguel Torres vs. Demetrious Johnson fight at UFC 130 and Torres evolution as a fighter since joining Tristar. Zahabi also talked about the possibility of seeing Georges St-Pierre vs. Nick Diaz in the near future.

Check out the interview after the jump.