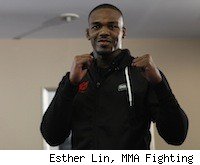 LAS VEGAS -- Jon Jones is expected to be ready to return to the octagon around September or October. The question now is, who will the UFC light-heavyweight champion face when he does come back?

UFC president suggested on Wednesday that a fight with the winner of August's Rashad Evans vs. Phil Davis bout is unlikely, and that with a win at Saturday's UFC 130, former champ Quinton "Rampage" Jackson might get a chance to reclaim the belt.

The problem for the Evans-Davis winner, White said, was an issue with timing. When Jones is declared ready to fight, the UFC will put the wheels in motion for his return, and choose from the available candidates instead of waiting to see what happens in August.

Even though there is public interest in the Jones-Evans feud, the UFC would run the risk of waiting for Evans and then getting no payoff if he is upset by Davis, a blue-chip prospect who most recently defeated Antonio Rogerio Nogueira. But beyond that is a promotional issue.

"Let's say hypothetically speaking, Rashad Evans fights and wins this fight against Phil Davis," White said. "Let's say he wins that fight in 30 seconds and comes out without a scratch, feels like a million bucks, and is ready to go against Jon Jones in September. We will have already shot the commercials and all that stuff. That stuff is three months out. It would be impossible to do."

Instead, White said, it is likely that the UFC will have an answer by the end of the weekend. Which essentially means that it's Jackson's opportunity to lose.

"I think that if Rampage wins, you've got to be more interested in the Rampage fight because Rampage deserves it," he said. "I think he's at the top. [Lyoto] Machida is coming off a win over Couture. I think Machida needs another fight, but the way my luck's going lately, who knows?"

Jackson will have to get by Matt Hamill to earn the probable fall title shot. He is considered about a 3-to-1 favorite to win the fight.