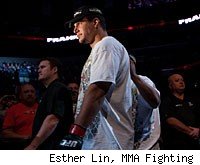 UFC 130 took a major hit when the main event, Frankie Edgar vs. Gray Maynard, was called off. But the 10-fight card still has plenty of intriguing fights, even if it doesn't have the kind of compelling main event that fans expect for their pay-per-view dollars. We've got a full slate of predictions right here.

When: Saturday, three fights on Facebook at 6:30 PM ET, two fights on Spike at 8 PM ET and five fights on pay-per-view at 9 PM ET.

Predictions on the fights below.

Quinton Jackson vs. Matt Hamill
The main event represents a huge opportunity for Hamill to prove he belongs with the big boys in the light heavyweight division. It also represents the kind of fight where Rampage doesn't have much to gain: If he wins, he did what he was supposed to do. If he loses, everyone will say he's not fully committed to MMA anymore, and his career is on the decline.

But while Hamill is one of the most likable fighters in the UFC and an easy fighter to root for, I just don't think he's a complete enough fighter to handle Rampage. This looks to me like a fight that Rampage wins by TKO.
Pick: Jackson

More: UFC 130 Fight Card | | Watch UFC 130 Live Online | UFC 130 Results
Frank Mir vs. Roy Nelson
Outside the Big Four (Cain Velasquez, Junior dos Santos, Shane Carwin, Brock Lesnar), this is the best matchup the UFC's heavyweight division has to offer. Mir is the former champion who needs a couple more wins to get another crack at the title, while Nelson is the former Ultimate Fighter winner who needs to prove he can compete in the Top 10 of the heavyweight division. The betting lines have Mir as a slight favorite, but I'm not so sure it should be "slight." I see Mir as better than Nelson in all aspects of MMA, and I'll be quite surprised if he doesn't win this one.
Pick: Mir

Thiago Alves vs. Rick Story
Two or three years ago Alves was the best striker in the welterweight division, but he has looked in recent fights like he lost a bit of his killer instinct. Story is a good wrestler who's capable of grabbing hold of Alves, hanging onto him and winning a decision if Alves doesn't unleash his striking, but I think we're going to see a better version of Alves on Saturday, and he should win a TKO.
Pick: Alves

Stefan Struve vs. Travis Browne
The 6-foot-11 Struve and the 6-foot-7 Browne ought to be a lot of fun in the Octagon together. Browne, who's coming off a draw with Cheick Kongo, has never lost a fight, but I think his time is coming. Struve wins this one by submission.
Pick: Struve

Brian Stann vs. Jorge Santiago
Santiago went 1-2 in the UFC in 2006, but he's a much better fighter now than he was then: He went 11-1 in his time away from the UFC and is coming off a victory over Kazuo Misaki in Japan that I thought was the best MMA fight of 2010. Stann represents a very tough challenge for Santiago's first fight back in the Octagon, but I think he takes it.
Pick: Santiago

Miguel Torres vs. Demetrious Johnson
In my opinion, this is the most intriguing matchup on the entire card. Torres is a Top 5 bantamweight who could be closing in on a shot to re-gain the bantamweight title, while Johnson is an up-and-coming 24-year-old who's coming off a big win over Kid Yamamoto. Johnson's great takedowns and top control make him a threat to anyone, but I think the combination of Torres' reach advantage and ability to submit people off his back make him likely to finish Johnson one way or another.
Pick: Torres

Kendall Grove vs. Tim Boetsch
These guys are probably fighting for their jobs. Grove, the former Ultimate Fighter winner, has lost three of his last five, but he should still handle Boetsch, who's a marginal fighter and not really at UFC level. I expect Grove to finish Boetsch.
Pick: Grove

Gleison Tibau vs. Rafaello Oliveira
Oliveira was dropped by the UFC after a loss to Andre Winner, but he's now getting another chance after winning four straight in smaller promotions. Unfortunately, I don't think he'll have much for Tibau, a veteran who's bigger and stronger and should be able to control Oliveira and win a decision.
Pick: Tibau

Michael McDonald vs. Chris Cariaso
McDonald is coming off a Fight of the Night-winning performance in a win over Edwin Figueroa, and I wouldn't be surprised if this one wins Fight of the Night as well. Cariaso, who won his UFC debut in January, is a good striker but not quite as well-rounded a fighter as McDonald.
Pick: McDonald

Renan Barão vs. Cole Escovedo
Barao has one of the most amazing records in MMA: He lost his first professional fight but hasn't lost since, and now has a pro record of 25-1-1. He's now making his UFC debut, and Escovedo may be his toughest opponent yet, but I like Barao to keep the streak going.
Pick: Barao