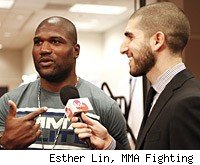 LAS VEGAS -- MMA Fighting spoke to Quinton "Rampage" Jackson on Wednesday about his UFC 130 fight against Matt Hamill, why it bothered him when Hamill said he would break his will and why didn't sound like he wanted to be interviewed during his recent appearance on The MMA Hour.