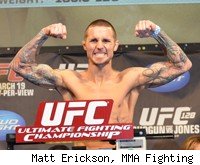 Eddie Wineland will take one more crack at Team Alpha Male when he faces Joseph Benavidez at the UFC's show in Milwaukee, UFC on Versus 5, in August.

Benavidez (14-2, 1-0 UFC) has won two straight since a split decision loss to bantamweight champ Dominick Cruz at WEC 50 last August. He submitted Wagnney Fabiano at WEC 52 in November, and in March, also at UFC 128, he beat Ian Loveland by unanimous decision on the preliminary card.

Wineland's loss to Faber, in the co-main event at UFC 128, snapped a four-bout winning streak for the Northwest Indiana-based 135-pounder, who is also a full-time firefighter. Wineland (18-7-1, 0-1 UFC) had put together back-to-back Knockout of the Night bonuses in his last two WEC bouts before fighting Faber in their UFC debuts.

With the win over Wineland, Faber earned a shot at Cruz's title at UFC 132 in July. After the fight, UFC president Dana White told MMA Fighting that had Wineland upset Faber, he likely would have been given a shot at Cruz, the only fighter in the division with a longer streak than Wineland going into the Faber fight.

While Wineland will be looking for some payback for the Faber loss, Benavidez, with a win, could find himself in an interesting situation. A victory over Wineland would be three straight for Benavidez, putting him right back into title contention. If Faber, who dropped from featherweight to bantamweight last fall, beats Cruz to win the title, talk would soon begin on whether the two close friends and teammates would fight each other.

The UFC late Tuesday also announced featherweights Leonard Garcia and Alex "Bruce Leroy" Caceres, from Season 12 of "The Ultimate Fighter," will meet on the Milwaukee card. And Jared Hamman will move up from welterweight to fight CB Dolloway at middleweight, the UFC said earlier this week.

UFC on Versus 5 will take place Aug. 14 at the Bradley Center in downtown Milwaukee. The card has filled up quickly, including a welterweight potential slugfest between Chris Lytle and former title challenger Dan Hardy; a lightweight bout between former WEC champ Ben Henderson and Jim Miller; and Stephan Bonnar, who spent time training in Milwaukee under Duke Roufus several years ago, against Karlos Vemola.