Jorge Santiago Eager to Introduce Himself to New UFC Fans 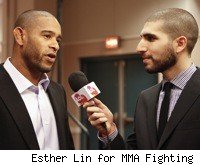 LAS VEGAS -- MMA Fighting spoke to Jorge Santiago on Wednesday about his UFC 130 fight against Brian Stann, what it's like to be back fighting in the UFC, how he's improved as a fighter since getting released in 2006 and much more.