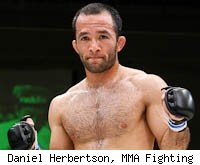 Strikeforce veteran Darren Uyenoyama has been forced out of his May 29 DREAM bantamweight grand prix bout with Atsushi Yamamoto due to a metacarpal fracture in his right hand.

DREAM Keiichi Sasahara delivered the news of Uyenoyama's withdrawal on Wednesday, stating that the San Francisco-based grappler first injured his hand in his September 2009 demolition of then-Shooto champion Shuichiro Katsumura. The hand was thought to be healed but Uyenoyama re-fractured the bone during a training session on Monday.

Coming in on four days notice will be Seichi Ikemoto pupil and DREAM newcomer Yusaku Nakamura. The Osaka-based striker racked up an 8-1 record in the amateur ranks before turning pro in 2010 and since then Nakamura has gone undefeated in his professional career. His fists have scored him three consecutive knockouts thus far, his most recent a second-round stoppage of the much more experienced Isao Terada at Deep 50.